I've been baking bread, almost all the family eats, for more than 30 years. Back in the last century, when I used to brew beer, I often took a generous spoon of the beige sludge at the bottom of the brewing keg, put it in a kitchen mixing bowl with water, flour, and salt and made perfectly acceptable loaves of bread. But I never drank enough to have this as the sole source of yeast for bread. I started off using little 7g sachets of dried yeast which worked out at about €25/kg! and comprised about 15% of the ingredients cost of a loaf. The 18c pressure on my wallet was enough to precipitate me out to an industrial estate to buy 500g of dried yeast in a tin.

A few years ago, I caught the sourdough bug, which was good because I didn't need to buy dried yeast anymore. But it was also relentless: because I was solely responsible for the the health and welfare of my sourdough starter, I had to keep feeding the ferment and occasionally spring-clean the jar which was its home. And of course I had to eat bread with every meal to keep up with the starter turn-over. I still had about 80-100g of dried yeast left in the last 500g tin and would occasionally use this to make 'sweet' bread or, very occasionally, croissants. 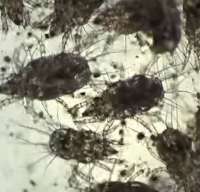 Time runs fast when you get old, and I can no longer remember when I last topped up the original yeast tin with a packet from the Dublin Yeast Co. Must be more than 3 years ago anyway. I did get the sense that it had lost its ooomph as a raising agent. Last weekend, with my birthday and all, I agreed to make flat-breads for the party. But, when I opened the tin, the yeast looked ever so slightly furry and I decided that sourdough flat-bread would be Just The Thing. On Monday, I brought the yeast into the lab to have a closer look with one of our new microscopes. Under the 4x objective, a salt-spoonful of yeast looked not so much furry as alive. It seemed like about 50% of the volume was crawling creatures, which on investigation turned out to be Acarus siro, flour mites. They aren't insects because they have eight legs and are more akin to spiders and ticks [whc prev]. The picture [R] is from a video by Victor Fursov from Ukraine, because I wasn't clever enough to capture my own image on the fancy new tablet-enhanced microscope. When I got home, I added the yeast, mites and all, to the compost heap where they'll have to fight their corner with a lot of small rough kids from the wrong side of the tracks. This means that, after 30 years, I've completed a cycle and am back to buying yeast in sachets and infrequently.

This reminded me of the old advice to never look at your favourite cheese down a microscope because several of the most interesting and tasty cheeses - Mimolette, and Tomme céronnée for starters - add mites to the mix deliberately in order to improve the flavour. Life would be insupportable if the only 'cheese' available was American Sandwich Slices.


Posted by BobTheScientist at 07:40