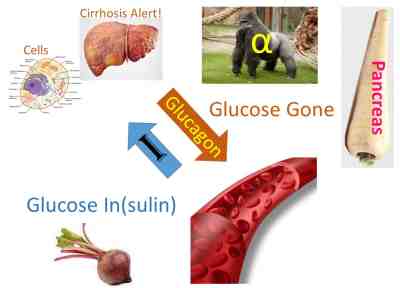 No, this is not another rant about the Food Police. Well not directly anyway. It is rather another part in my series of Graphics for HumPhys [prev Calcium balance; blood pressure; mitochondria; temperature]. You may think you can drift off, because this is going to be boring, over-my-head, academic and irrelevant. It may have the other three attributes but it is not irrelevant because, like me, you have a body. Having a, now beginning to fall apart, body is what has sustained my interest in teaching Human Physiology these last 6 years. If you don't make some effort to understanding the vital functions you'll be wrong footed in managing your health. If you're approaching, or over, 50 you'll no longer be able to take continued health for granted.

There is a difference between knowing a thing and knowing the name of a thing; as Dick Feynman's Dad famously instilled into his young son. But in the artificial learning system which is school and college, you have to be up for the Naming of Parts [evocative, deliberately retro, 1971 film of same by Robert Bloomberg] so that the Learning Outcomes [boo hiss] can be assessed. I've told my students that naming of parts in the micro-management of the concentration of glucose will likely come up on exams and so they might concentrate some attention on their notes on the subject. Their notes are few and far between, because my students have mostly not been trained to write things down as an aid to memory. Some of them will concentrate some attention on my [powerpoint] notes on the subject and for some of them staring at the PPTs the night before the exam will work. But there are pages of notes and if they just internalise, as an Executive Summary, the picture at the top of the post.

What does it mean? That two households hormones both alike in dignity, in fair Verona Pancrea, where we lay our scene, act out a delicate pas de deux of homeostatic regulation. Insulin and Glucagon are both made in the pancreas, an organ the size and shape of a flubby parsnip that sits just under your stomach and above the bowel. The pancreas has two main functions a) producing and leaking digestive enzymes into the top of the small intestine b) making a passel o' hormones and leaking them directly into invasive capillaries and thence into the circulatory system. Insulin is made in little clusters of beta beetroot cells while glucagon is manufactured in alpha [male] cells. In the lecture, I may make a quip about me being the alpha male because I am a silverback and almost the only bloke in the room [the sex-ratio in Pharmacy Technicians is 95% female].

In a well regulated bod, insulin and glucagon circulates at just the right complementary concentration, so that every cell [100 trillion of them all demanding service] gets enough insulin to dock with its insulin receptors and allow the uptake of glucose. Without glucose inside the cell, there would be no metabolic activity, without insulin the glucose just stays in the blood where it encourages the growth of pathogenic bacteria, septicaemia, gangrene and an early death. Therefore, it's insulIN to the cell with the glucose. Insulin is a small protein with a half-life of about 4 minutes! The beta cells crank up production of insulin after you eat something because the cells detect the upspike in circulating glucose. Four minutes later half the insulin has gone and within an hour it is all degraded and the cells have scarfed up all the available glucose.

What then? what if you have to run for a bus or sit an exam more than an hour after you ate your porridge? Well we have a word for that and its glucagon. Certain cells, especially in the liver and in muscles, are rather greedy for glucose when it is available. They clag a lot of glucose molecules together in a complex poly-saccharide called glycogen. Glycogen is, like starch its plant equivalent, relatively inert - it just sits there waiting for the call. Demand for glucose is that call: when blood glucose sinks below a threshold, the alpha cells of the pancreas detect the fall and release glucagon. Glucagon triggers the liver cells to give up the ould glycogen and break it down into usable glucose. Therefore glucose is glucaGONE from the cell.  In the picture I show a yellowed crumbly liver on its last legs from cirrhosis because that is going to be more memorable. In your Memory Palace, it's more effective to employ images which are ludicrous, naughty, revolting or unsettling because they are more sticky <eeuuuuuuw>.
Posted by BobTheScientist at 07:45