Bill Bryson tells a story about going to Hammerfest in the hope of seeing the Aurora Borealis and being told that success was iffy. People would travel hopefully, long and hard to get to the remotest parts of Far North and stay there until they had to go back for work and . . . see nothing except Norwegians drinking beer while eating reindeer steaks and lutefisk. Bryson got lucky on Day 16, and can now die happy. Of course like Simon Clark and my mother, Bryson made his luck by making the laborious trek. 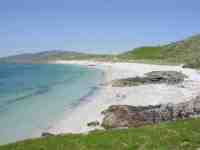 For many people, it's like that with St Kilda [prev], which operates a powerful draw on a certain category of pilgrim souls. It's damnably difficult to get to St. Kilda; even if you have a private yacht the weather closes the place off for weeks on end. Even after you set off for the 5 hour journey in calm seas and a glorious sunrise, a ferocious storm can blow in without notice and kibosh your paltry pilgrim plans.  I've just finished Love of Country: a Hebridean Journey by Madeline Bunting. It's a book, it's a travel book but it's not an original travel book. It's not really a wholly derivative In The Footsteps of . . . [insert one of AlexanderTheGreat | PeterFleming | Hannibal | RobertLouisStevenson] sort of book and it's not a gimmick like Round Ireland with a Fridge or walking the Camino de Santiago in Reverse.

Nevertheless Ms Bunting is standing on the shoulders of others who have sought themselves in the remoter, bleaker edges of this our Western European Archipelago WEA. Despite citing Norman Davies in her references, Bunting slides easily into calling the conglomerate of islands off the NW coast of Europe The British Isles. Aaaaaargh! Nope! That designation is a value-laden label that sits easily only if you live and breathe in London. The title itself has a tendency to rile me up because I'm with Samuel "Dictionary" Johnson on "Patriotism is the last refuge of the scoundrel." Dr.  Johnson is great source for comparison with a modern experience of the Western Isles, and Bunting draws on his views and sardonic comments on Scotland and the Scots. OATS: A grain which in England is generally given to horses, but in Scotland supports the people.

Bunting does get to St Kilda but only on a day-trip. Her plans to spend a couple of weeks there in a tent are set at naught by the weather. On a walk along Tobha Mòr beach in South Uist [pics], she comes across a tide-washed office chair and muses "A sampling of the tons of plastic which circulate the globe was scattered amongst the shells and seaweed: brightly coloured bottles, odd shoes, buoys, bits of old rope and fishing crates."  I don't know if I'll now be able to walk the Hebridean Way with all my gear in a rucksack: the waste of leaving all those fish-crates behind may be too painful. I guess I could leave them alongside the fence at Howmore Hostel [as L].

I think part of my dissatisfaction with Bunting's Hebridean book, in contrast with Poacher's Pilgrimage: an Island Journey by Alastair McIntosh, is that it is editted from a great many visits to the Hebrides over a span of decades. If you're on The Way to discover or reveal some truth about your place in the Universe, then you're better off to commit a chunk time away from the office, the school-run and a familiar bed. If you flit in and out you're not working hard enough to make your own luck. But what do I know? I only saw the kingfisher once on my walk through Spain
Posted by BobTheScientist at 07:44