Y'know how people slag Twitter for tweets about what ordinary people had for their breakfats [sic! a first meal of the day without saturated animal fat ain't worth getting out of bed for]. But sometimes the domestic and quotidian can be neat enough to capture. Now it's not for nothing that m'life-partner is referred to on The Blob as The Beloved. A couple of weekends ago we were expected company and TB got a bit aspirational on the catering front. She left on Monday to look after her esteemed father Pat the Salt. When I got back from work that night, I found that the vacuum packed fresh strawberries were a little furry: probably Podosphaera aphanis. Only a little, mind, so I scooped the two worst affected fruit in the compost bin and cooked the rest up as un p'tit compôt des fraises and very nice they were too. Three warm days later and the compost bin looked interesting: 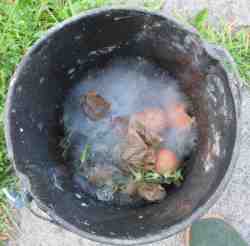 Go forth an multiply, indeed! That will go down a treat in the wider vistas of the the compost heap, and indeed it has because we try not to keep microbiological experiments active in the kitchen . . . except for the sourdough, of course. Then a week later it was white-on-white when I found a white ermine moth Spilosoma lubricipeda trying to look inconspicuous on the bottom of the bath: 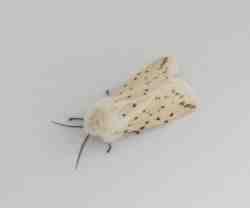 Not such a good match, my fine young moth, you should try a touch of blue to match the copper salts that bleed from the inside of our pipes because of the acid water [prevomoan]. We moved the moth to an open window where it can easily escape if it wanted to lay eggs on  stinging nettle Urtica dioica, broom Cytisus scoparius, alfalfa=lucerne Medicago saliva, viper's bugloss Echium vulgare or dandelion Taraxacum officinale.

And because [white] things always come in threes, I was walking rapidly across campus at The Institute last Friday late for an examiners meeting when I heard the, once heard never forgotten, wook wook sound of flying swans and saw a pair of these wonderful creatures pacing North above the River Barrow. I'm so glad I forgot my glasses and had to go back to the car for them.
Posted by BobTheScientist at 07:37