It's sad when an old friend is suddenly brought low and you know s/he will be tidied away and replaced by a younger model. 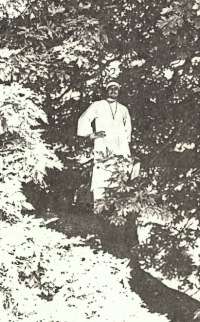 On Saturday 2nd June, the picture above was going the rounds on Twitter, Newstalk and other media outlets because an iconic maple Acer macrophylum in the Front Square of Trinity College Dublin had coming crashing to the earth at 0400hrs. When I caught up with the news at tea-time, I cried out "My tree is dead" and The Beloved came in to commiserate. We went on a hunt for the picture that evidenced the connexion between me and the mighty tree.

Back in 1973, like The Ginger Man 25 years earlier, I came from foreign parts to be a student in Trinity College. I left my natal home and country with what I considered essential gear for studenting. This included:

I met The Beloved about three weeks later and the following Spring, she lent me a white galabeya [as L: not me!] which I think she looted from her father Pat the Salt, an old Africa Hand. Come Rag Week or ?Trinity Week? in 1974, I decided that wearing the galabeya and a white cotton headband would be the height of fashion for a young buckeroo about College; check out the love-beads as well. And it was so. To gild the Wildean lily, I climbed into the maple tree and struck a leafy pose about 3 m off the ground. A photographer from the Irish Times snapped this epitome of youthful dinkitude and my photo appeared in the paper the following day. All I have is a crap xerox of a xerox of the original pixellated picture. I don't know what I was thinking at the time  climbing a tree in a long skirt but it probably wasn't notably profound. It was of course against all ideas of Health & Safety in the Workplace even back in those free-wheeling times.
Posted by BobTheScientist at 08:15