Pay attention; write it down

Of all the fun I have teaching at The Institute, a special place is kept for my Human Physiology course for 1st Year Pharmacy Technicians. It started at 10 'credits' and 75 contact hour but two years ago this was trimmed to 5 creds and 60 contact hours. The earlier version 'fat' version was more leisurely had more time for reflective learning. The 60 hour version covers the same material in 20% less time, so can be a bit of a gallop. But I'm not about to trim my slightly off-topic, intended to be inspirational, introduction called Alert in the Pharmacy. Here I tell war stories about {Thalidomide, McBride, Lenz, Kelsey} and also about {smallpox, Jesty, Jenner, Chetnole and Blossom the Cow} and wrap it up by exhorting them to pay attention at the counter because they might be the first to see the signs of a community health problem. If I'm on a high, I'll probably throw in a mention of  John Sassall the protagonist of  A Fortunate Man, John Berger's compelling investigation of a rural GP's life.

I am annoyed at a failure of my education that I only last week came across another famous-in-his-day GP who paid attention. Will Pickles was a doctor in Aysgarth from 1912 to 1965. Where? Aysgarth! An obviously Norse name, [meaning any of: the garden of the gods, water of rocks or the enclosure of oaks] it is a village about midway up the valley of Wensleydale in Yorkshire. The mappe with antient fonts delimits the extent of Dr Pickles' practice: 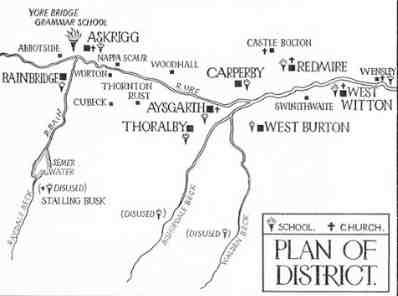 Pickles travelled all over the area for more than 50 years until the amputation of his right leg put a stop to his gallop. At one time standing on a hill overlooking the valley, he realised that he knew the names and patrimony of all the people in every home that he could see. He also knew or could deduce a lot about who among his patients were grinding up against each other in the social mill because they were presenting the with same diseases. "Thus to my knowledge, thirteen instances of this disease resulted from the determination of one girl, jaundice or no jaundice, not to be deprived of what she considered to be her legitimate amusement" [source]. Even with his capacious memory this was only really possible because, with the help of his diligent wife, he captured the names, dates and locations of everyone who fell sick. 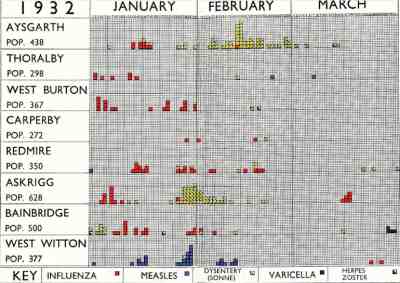 Even this snapshot of the data tells you a lot. In 1932, people lived local and only shared sputum with the closest neighbours. How else could the January February measles epidemic have been confined to West Witton and not spread to West Burton and Aysgarth a mere 5km down the A648?  The dysentry, however, appears to have started at Askrigg and then moved East to Aysgarth. If you pay attention you can calculated the incubation period for each disease. The spikes of new cases of measles in West Witton occur every 10 days while the blips of influenza in West Burton are separated by about 2 days. With similar data analysis, Pickles was able to reveal the incubation period for catarrhal jaundice [aka infectious hepatitis] was 25-35 days; nobody knew that before.

The data from measles in W.Witton is particularly instructive w.r.t. herd immunity. You get one case at the beginning of January 1932; 6 more cases 10 days later; 14 cases 10 days after that; and 7 cases 10 days afterwards. At that point everyone in the village who is infectable has been infected and the measles virus has no place to hide / reproduce. End of measles epidemic. With vaccination, you'd drastically reduce the number of susceptible people and the epidemic would peter out earlier . . . before Betsy Snitterthwaite comes visiting from Carperby and carries the virus to fresh fields up the valley.
Posted by BobTheScientist at 07:42