Deaf to the World 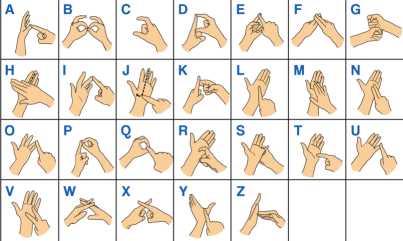 How do you communicate with someone who is deaf when neither of you has a pencil and the back of an envelope? And you can't afford a pair of hearing-aids that cost as much as a second hand car ['05, perfect working order, one lady owner, a snip at €2500]. BSL DGS LSF are all used in different parts of Europe for this purpose. Language studies are notoriously rich in TLAs [three-letter acronyms] When we were kids, we all picked up, and occasionally used BSL British Sign Language [R] at school.  We could then communicate in situations - school assembly for example - where silence was required but information needed to be conveyed. It is a two-handed alphabet in which most of the consonants look like their written form while the vowels aeiou are indicated by pointing to the 1st 2nd 3rd finger of the left hand. If everything had to be spelled out, you'd fall asleep before you'd covered two sentences, so signers have developed a huge vocabulary of gestures to cover normal everyday comms and only have to spell out proper names and technical terms. So signing is like written Japanese with kanji for whole words or concepts and hiragana to spell out the the syllables of words not covered by kanji.

It came as a total surprise to find that British finger-spelling is a completely foreign language to Irish signers. Obviously, except for a few die-hard nationalists and some thousands of Bangladeshis, Poles and Nigerians, everyone speaks English at home in Ireland. But not if you're deaf. It is like Chinese people can communicate in writing wherever they come from but that completely different languages are spoken in Beijing and Shanghai: they read the same books but different sounds come from their mouths. The whole idea is politically charged because, just like the french tried to force Parisian down [and indeed out of] the throats of citizens who'd rather have been speaking langue d'oc / occitan; so successive Chinese governments have 'encouraged' everyone to speak Mandarin. [chekkitout the Shangainese] In both cases, one language means one nation. Irish has a phrase gan teanga gan tír [no language = no country] which is derived from a quote by St Padraig of Pearse "Tir gan teanga, tir gan anam” -- a country without a language, is a country without a soul. One way to start a fight in a bar is to assert yourself strongly either way about the requirement to speak Irish if you want a job in the civil service. 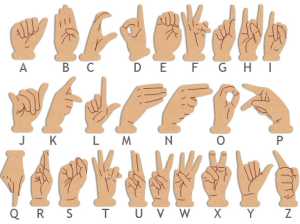 It turns out that ISL Irish Sign Language is, along with DGS Deutsche Gebärdensprache the German ditto, a derivative of LSF [langue des signes française] which is a one-handed comms medium [L]. Incidentally that shows how french has a Capital-poor written language while German capitalises all its Nouns.  There is no evidence that one-handed signing is quicker than the British method. Which  just shows that two languages can evolve independently and have equal efficiency.
Original reference about signing language evolution.
Posted by BobTheScientist at 06:38