What do we talk about when we talk about Octopus?  [another Raymond Carver ref]
1) I've told my Delicious and Inclusive story Polpo in the Park of how I was taken into the bosom of the village of Grañón when I was on my anti-pilgrimage walking away from Santiago de Compostella in 2004.

2) What do we talk about when we talk about Hodgkin? I've mentioned Dorothy Hodgkin, Britain's only female Nobelist, but only in passing when  talking about other women in science. She was a Hodgkin by marriage not patrimony having wed Marxist historian Thomas Lionel Hodgkin. Hodgkin's lymphoma is named for physician and humanitarian Thomas Hodgkin (1798-1866). His nephew was the historian Thomas Hodgkin (1831-1913), and his grandson was Dorothy's husband. Another grandson was Alan Lloyd Hodgkin, of whom we treat. Now go away, breathe deeply and draw a family tree showing how many genes each named person has in common. For full inclusivity be sure to show Alan Lloyd Hodgkin's father-in-law Francis Peyton Rous (1966 Nobel Prize) who discovered that cancer could be caused by a virus, now called Rous Sarcoma Virus RSV. RSV served as a model for laying bare Epstein-Barr Virus EBV which was so important to Denis Burkitt's work on infectious lymphoma. EBV seems to be associated with the development of Hodgkin's lymphoma.

Alan Lloyd Hodgkin won his Nobel for his work with Andrew Huxley. Another huge science family there: Andrew was a grandson of Thomas Henry "Darwin's Bulldog" Huxley, as were his cousins Aldous and Julian Huxley. Hodgkin and Huxley were physiologists who were interested in what makes nerves tick. They figured it was something to do with the electrical charge inside and outside the cell. In my Human Physiology course, I go on and on and on about scale. Some things are much smaller than others and it matters. 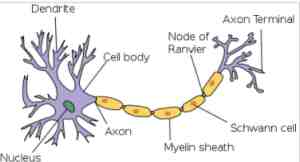 The nerve which you can see and trace form one end to the other if you dissect a mouse or a dogfish is made up of dozens or hundreds of cells called neurons [cartoon above]. The axon of a mouse or human motor neuron is about 10µm in diameter. Good luck with getting an electrode in that! But H & H knew that certain cephalopods [squids and octopuses] including Doryteuthis pealeii had giant motor neurons that were 50x or 100x wider and as long as a squid. In 1939 they showed that they could measure, and indeed had measured, the action potential inside these cells. The boys spent their WWII years doing research on the electronics of radar but returned to the lab after the war and worked out the whole electro-physiological system of nervous transmission. If you are a rocket scientist you can read their key 1952 paper here.  I'm not: that sort of stuff melts my mind. Hodgkin and Huxley secured the 1963 Nobel Prize in Physiology and Medicine; the year after Watson, Crick and Wilkins got it for working out the structure of DNA.

3) Obviously the cephalopod nervous system became a convenient model for all sorts of experiments to explain the mechanism and control of nervous transmission and nobody thought to ask the squids if they minded contributing to science in this way. Physiologists didn't even stop to think whether the poor cr'atures felt pain. Yet we recognised that they were quite intelligent. My generation has seen a transition from being able to do whatever you fancied to 'dumb animals' to having to fill out a ream of approval forms with the Ethics Committee to carry out any sort of experiments on living animals and also to be circumspect in the numbers of animals which are 'sacrificed' on the altar of scientific progress. And indeed commercial progress: lots of rabbits get exposed to cosmetics to ensure that they are safe to apply to human faces.  In 1991, at first in Canada and later elsewhere, the ethical protection accorded to vertebrates [mammals, birds and frogs] were extended to cephalopods in recognition of the fact that squids and octopuses could figure things out. My pal P from Boston sent me a neat article explaining the ethical dilemma at the centre of squid research and >!shazzzam!< a solution to our anxieties. Seemingly ethanol [booze to you and me], or indeed magnesium chloride MgCl, is a really effective way to stop cephalopods in their tracks so that scientists can work away on them.

Hmmmm that's convenient but recently the 'horrible spectre' has been raised that, in its cephalos, the poor squid is writhing in agony as its nerves are poked, jangled or bathed in nicotine. We are now primed to be sensitive because of the ethical and economic travails which the killing states have been through to find a 'humane' way of carrying out the death penalty while avoiding anything 'cruel and unusual'.  Robyn Crook of SFSU  has now laid the cephalopod have feelings boogie to rest. She and her team set up a system that could measure both motor responsiveness and sensory signals to the brain. What you want is a system that a) doesn't have the animals twitching and b) has no incommming signal to the brain which could be interpreted as pain. It turns out that MgCl leaves a 15 minute window of sensation after the end of reactivity while alcohol is obviously annoying to the squids when applied. Another anaesthetic has too narrow a dosage window between I can still feel it and I'm dead. That's nice normal science: chipping away at a problem, having a clear hypothesis, setting up controlled experiments, replicating them in other species and coming up with an answer that has utility in the physiological community. The fact that it makes like easier for a group of animals that some consider to be as clever as a fox that has just been elected Professor of cunning at Oxford University is also all to the good. In particular, and I quote from the Science article: ". . . they're disinclined to stay put—octopuses can escape through minuscule holes . . ."

4) . . . which brought me back to another story about ethics and the octopus. Back in the day when I was working to raise funds for going to graduate school, I had a job in the Afdeling Vissen Diergaarde Blijdorp aka Fish Department, Rotterdam Zoo.  My first job each day was to clean the front of all the aquaria with a mixture of dilute acetic acid and a chamois leather. The previous day's visitors had covered the glass with finger and nose prints, and indeed lip-prints and we liked to at least start the day with a clean viewing slate. One of the printiest exhibits contained a single Octopus vulgaris, the same sort of creature as I was to eat in Grañón 25 years later. In lieu of a crevice in the rocks, we'd given it an earthenware land drainage pipe, where it used to retire after feeding time. Well, one night the poor octopus made a run for it; squeezed through a crack between the cover of the aquarium and flopped to the same floor of the service area where I had my near-death experience with a stone fish. The octopus was less fortunate and by morning had expired. What to do? The octopus was unaccountably popular with the visiting kids and it would be some weeks before we could source a replacement. Someone had the bright idea of simply turning the earthenware pipe through 90o. That way we could bamboozle the public into believing that the octopus was, like a Norwegian Blue parrot, merely sleeping. Clearly there were ethical issues about taking money under false pretenses but we none of us lost any sleep over it.

M
ore women in science
Posted by BobTheScientist at 07:39