One sunny day in late April 2015, I had a great time, stripped down to me skivvies dagging the sheep. That is removing the matted dung from their hind-quarters with a mix of fingers, scissors, fleecing-shears and Fairy Liquid. After I'd finished, I had to hose myself down outside before having a hot shower in the bathroom; and still smelled of sheep.

I mentioned the frightening downside of swallowing a couple of toy Geomag neodymium magnets last Christmas. It's a whole other level of complication from sticking a bead up your sister's nose. Dau.I and Dau.II had a boxful of Geomag when they were kids with which we made the complete set of Platonic Solids and other cool and educational things. It gave me a frisson of horror to realise that I'd been wholly unaware of their bowel-obstructive possibilities. After a couple of high-profile (slow news day) cases several political entities moved to ban magnetic toys. Geomag and their cheaper knock-offs gave some push back to this threat to their income: "More kids are killed by cars each year, are you going to ban cars?" Which is missing the point: we know that butcher's knives, boiling water, cars and chain-saws are dangerous and can warn kids and simpletons about them. Geomags are not obviously dangerous, so even intelligent, well-informed parents need to gee-up their imagination and /or be protected from insidious danger.  These arguments are informatively teased out on the How to Spot a Psychopath blog.

Dagging and toys with unintended consequences collided this Easter weekend when the grandchildren came for the holiday. Someone, quite possibly their parents, had bought Gdau.I and Gdau.II a boxful of Bunchems a colourful 'creative' toy in the tradition of Lego and Geomag. The main ingredient of Bunchems are little lumps of rubberised plastic which stick together because they are all covered with arms which interlock on contact. You can make whatever multi-coloured squidgy creatures that your imagination can . . . imagine [examples L]. 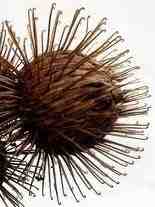 Bunchems work on the same principle as Velcro and both were inspired by the seeds of Arctium minus which in English goes by the name Lesser Burdock because the seeds aka burrs are covered in little hooks [see R] which greatly facilitates seed dispersal by sticking to passing mammals. On Saturday, the parents went off site for a couple of hours leaving Da Shonks in charge. The two sisters started to lob the Bunchems at each other and before I looked up from my I'm-minding-the-children book both of them had several Bunchem-burrs stuck in their hair. This problem is not new to the rest of the world and I think the company could have put a health warning on the outside of the box. If you try pulling the Bunchems out of the hair, the result is nothing but pain and hardship. The thing to do it tease the hair out of the Bunchem, tress by tress: that works. That way no tears and screams and I didn't need scissors and Fairy Liquid, let alone a shower afterwards. Bunchems were presumably designed by a team of engineers from an initial creative insight but clearly getting them tangled the hair of small children is one of the unintended consequences of the design.

Heck, it could have been much worse, lining much of the interior the command module of Apollo I with [flammable] Velcro helped stoke the fire that killed Roger Chaffee, Ed White and Gus Grissom on the launch-pad in 1967.
Posted by BobTheScientist at 07:38