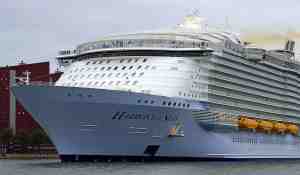 That would be Fanning Island, part of the Line Islands, once part of the British Empire but now a key inhabited element of Kiribati, the Central Pacific micro-nation.We were visiting Malden Island, another, uninhabited element of Kiribari in August 2016. Now I find out that Tabuaeran is key to the absurd economics of cruise-ships. These monsters, which might have 8,000 people on board: 2/3 paying passengers and 1/3 low-pay serfs. As they cruise about cost the planet about 12x more to ship fun-lovers from A to A via nowhere than it would to put them up in a hotel. The Japanese have a jolly wheeze for low carbon footprint: virtual reality flights in a cardboard studio set that allows the punter to pretend they are flying to Paris.

To cut wage costs, cruise-ships are registered in Liberia or Panama because their labour laws allow the ruthless exploitation of workers. But the [USA] Passenger Vessels Services Act of 1886 states  "No foreign vessels shall transport passengers between ports in the United States".  Accordingly cruises to and from Hawaii usually make a 1800km trek SSW to Tabuaeran to circumvent the law. Source of pic: kees torn - Harmony of the Seas Link. I only show the front half of the ship so you don't feel overwhelmed. Yesterday with the anniversary of the sinking of the Titanic and I am suoer-sensitive about only showing half the lifeboats. Disclaimer: I've been on a cruise to nowhere in December 1982 out of Boston. It lasted a weekend. It was okay. We saw whales. The management would have preferred if we'd stayed in the casino. And 'free' food ad lib is a mixed blessing in these obese times. I wouldn't want to spend a fortnight in such a place: I'd get restless.

That 1886 Act sounds So Yesterday.  It was instituted 235 years after the Brits signed into law the first of several Navigation Acts - 1651, 1660 and 1663 especially. This legislation limited trade between England and its colonies to that which was carried in "English bottoms". It was clear a case of restrictive practice to bolster the business of complacent and inefficient English merchants in the face of the relentless cost-cutting economies of rivals in the Netherlands. It meant that everything bound for New York and Philadelphia had to be shipped to London or Bristol, unloaded, pilferred, taxed and re-loaded before going on to the American Colonies. That added to cost and delay and was naturally resented by American merchants who'd rather ship their sugar, tobacco and rum direct to Hamburg and Bordeaux, there to pick up the latest books and mechanical toys and casks of claret to sell back home. For the purposes of the Acts, Ireland was a colony and Irish goods had to be shipped to England tariff free (to keep costs down for English customers) but imposts were implemented on the reverse trip.  "Free trade or a Speedy Revolution" was a slogan of the Irish Volunteers until they kicked off their rebellion in 1798.

A pattern of other islands
Posted by BobTheScientist at 07:30