My mother turned 98 at the end of March, which made her disproportionately pleased because she couldn't relate to 97 at all at all: "It's a prime number, dear, and it's too far to say 'almost 100', it's a nothing age".  I was over for a few days in February and heard this story a couple of times. I also absorbed a fair amount of anxiety about nursing homes, which consisted of a litany of anecdotes about unfortunate events which had happened to her friends-and-relations in such places. 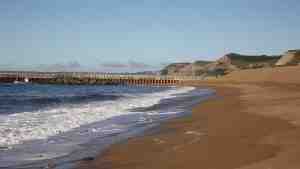 One of the reasons I went when I did is because m'sister, the primary carer, was abroad for three weeks and my visit plugged a gap in the schedule. It was interesting: a visit with her is often a visit to the 1930s or 1940s. And we also took in a couple of the local pubs for lunch. On one such expedition we set off for West Bay on the coast of Dorset because there was a nice place where you can get fish-and-chips. That was a bit of a bust because we couldn't find the little café but we did climb to the top of the shingle dune from the car park and got a whip of salty breeze and a terrific view [R] along the Jurassic Coast to Golden Cap. It turned out that the last time my mother had been in West Bay was before I was born, and she'd eaten her chips with a charming, funny and absurdly erudite young naval officer whom she eventually married. We got a very good lunch later at The Greyhound in Sydling St Nicholas.

On the other side of the Irish Sea family we have Pat the Salt, my aged father-in-law who is determined to hang around on Planet Earth until he clocks up the ton (makes 100 years) in 2025 and gets a card and a cheque from the President. The family have made a pact that Pat will be living at home at least until he doesn't know where he is. He currently has one very good friend, a bit younger that him who is in a nursing home because her own place is absurdly inconvenient to support a frail, partial sighted, mobility impaired person on her own. Pat has been to visit - once - and won't go again. We suspect it's because he thinks one of his children will "take him to visit" and not take him back home again.

In the light of these elder care issues, I am a bit primed for such matter as How to keep your elderly parents safe and in their home longer | Roger Wong | TEDxStanleyPark. [20 minutes of Youtube advice from a consultant geriatrician].  His advice:
Think before you shift your parent to be nearer to your home, even if you are the primary carer. Thus wrenching them from familiar surroundings and familiar community will be bad for them . . . and bad for you because all their care-and-attention will fall to you. It is waaaay cheaper to maintain someone in their own home than in a residential care facility, even if you pay for infrastructural support.
Posted by BobTheScientist at 07:33