I've had a little [bird] to say about the adverse effects of surface to volume ratio. Mammals and birds are generally homeothermic: designed to function only in a narrow range of temperatures. Small creatures, like those stormy petrels have a proportionately large surface area which is leaking heat all the time. They have, therefore, to be eating all the time to replace the lost calories. Big things otoh don't have enough surface for their bulk and have to be concerned not to over-heat. Having large ears networked with hot blood-vessels is the elephant's way of fanning off some of the excess heat. The system only really works if the skin is wet so that the latent heat of evaporation can suck heat from the body as the liquid water turns to vapour.

We human are somewhere between elephants and small birds in size. Very large people, of which we have more every year, really don't do as well in the hot weather as their skinny cousins. otoh the thin dudes feel the cold more. You don't hear much about sealing nowadays. In the 1970s we all got exercised about the practice of clubbing baby seals to death so that rich ladies could wear naturally white fur coats. I'm assuming that doesn't go on any more in commercial quantities. After struggling through Moby Dick, many years ago, I went on a whaling reading jag and that led to the sealing 'industry'. Any industry depends for its success on efficiency. Seal hunting required a sealing ship to descend on some undisturbed rookery and have the crew kill the mostest with the leastest and load the 'product' on board. The product was threefold: skin, meat and fat. Herding the seals to a central place was more efficient than hauling dead seals to the loading point. As the terrified seals lolloped to the killing fields some would die from heat-stroke. The pragmatic sealers had an uncompassionate term for these unfortunate seals which I cannot now track down - it might have been road-kill. The point at issue being that in seal physiology, as in human ditto, the transfer of energy from glucose to muscle movement via ATP is inefficient and this is manifest as heat. The frantic seals, flooded with adrenalin, were too bulky and had too small a surface area to dissipate the heat with the physiological systems that were designed to work in Arctic waters at 5oC.

Weirdly, my thoughts on these disturbing issues were triggered by my look at another sort of maritime enterprise - cruise-ships. In retirement, my folks acquired a wide experience in that industry and they 'spent my inheritance' [and welcome to it] on almost annual cultural cruises with Swan-Hellenic.  There is a limited market for spending the time between ports being lectured by a retired bishop about Byzantine triptychs and the Ἀρτεμίσιον: the great ruined temple of Artemis at Ephesus. So the Swan-Hellenic cruise-ships were quite small and pretty much everyone's cabin had a view of the heaving sea through a port-hole. 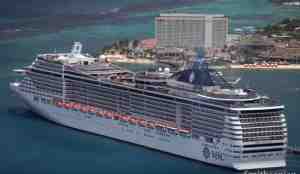 In two short decades (1988-2009), the largest class cruise ships [R MS Divina dwarfing a 10 storey apartment complex at Ocho Rios, Jamaica] have grown a third longer (268 m to 360 m), almost doubled their widths (32.2 m to 60.5 m), doubled the total passengers (2,744 to 5,400), and tripled in weight (73,000 GT to 225,000 GT). Just picture the scale here. Our modest 100sq.m. home is 11m across the front; a modern cruise-ship is 5 times wider. Even if, like in modern Dublin apartments the bathroom (and often the kitchen) is without a window, the interior of the megaship is filled with infrastructure and service space you cannot give a view of the heaving sea to all the punters. But a technological solution is at hand, which stems from the normality that many people now have a flat screen TV in their homes which is the size of a billiard table.  Indoor cabins above a certain class threshold are fitted with "virtual balconies" connected to out-facing cameras elsewhere in the ship. Why this should be considered acceptable rather than fraudulent is a mystery to me.

Here's another scaling issue. If you double the linear dimensions of something you increase its volume by 2^3 = 8x, if you increase them by a third the volume goes up 1.33^3 = 2.35x. The volume is more or less proportional to the passenger carrying capacity. 8 times more people need eight times as many lifeboats and you run out of rail to load and launch the boats: it is impractical to have two rows of life-boats along each side -  they have to be orange and that spoils the white slab wedding cake looks, as well as obscuring the view. One solution is to make the lifeboats bigger. By increasing the length of the lifeboat by 50% you can double 1.5^2 = 2.25 the carrying capacity. The scaling-factor is ^2 because you can only use the area of a life-boat until they design one which has two decks. That starts me down a Jorge Luis Borges rabbit-hole where the lifeboats get so big that they are the size of the ship. Current megacruiser lifeboats can carry 370 people. They are used as shuttles [L above] when not called upon for an emergency. In an emergency, even a traditional 150-person life-boat looks real crowded, hope they get rescued soon.
Posted by BobTheScientist at 07:51