When we lived in England, the neighbour's daughter kept an albino rat Rattus norvegicus as a pet. The rat's party trick was to run up inside one arm of the girl's sweater and emerge from the other. Spectators could, of course, track its movements - thinking about Loa loa is optional here. Most people, otoh, consider rats to be a noisome pest [Ger: unrat Schädling], which eat animal feed [dang!] and occasionally transmit Weil's Disease and a variety of other pathogenic bacteria and viruses - plague anyone? Humankind has had a loong-time relationship with rats, the rodents having trained us to gather food into one convenient place for them to sample. As near as dammit, wherever people are, or have ever been, there you will find rats, both brown Rattus norvegicus and black Rattus rattus aka the ship rat. If it was only that they ate the leavings of people, it would be containable. The problem is that rats are omnivorous and "food" includes the eggs and chicks of ground-nesting birds. Native birds which had been living the good life for thousands of years until people, largely European started the Age of Exploration and introducing their domesticates - goats, rats, mice, cats, pigs, foxes, rabbits, donkeys - willy-nilly. It is very difficult, and fabulously expensive, to put the rat genii back in the bottle - it cost about $10million and took 10 years to eradicate invasive rodents from South Georgia. Interesting chemo-ecological relationships between rats and seabirds in Chagos archipelago. 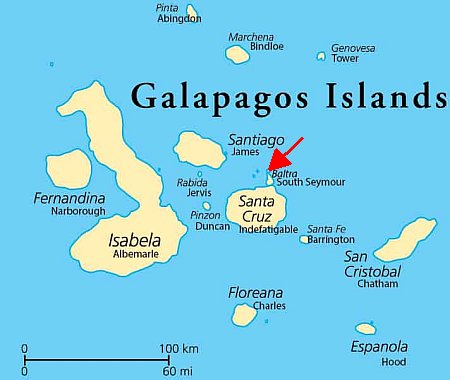 In the news last week was the fact that rats have been eliminated from two of the smaller islands in the Galapagos. To put this is scale: the entire archipelago is a little under 8,000 sq.km in extent - about the same area as County Cork or Las Islas Canarias. The 'clean' islands are Seymour Norte (the speck indicated with the red arrow) and an even smaller islet called Mosquera situated between Seymour Norte and Baltra / South Seymour. The map above [from LatinRoots Travel] neatly shows the parallel system of names applied to the islands since a) Ecuador annexed them on DarwinDay 12 Feb 1832 and b) Darwin himself arrived on HMS Beagle 15 Sep 1835. 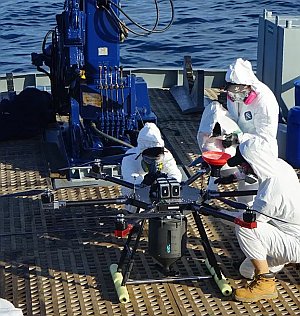 It was considerably cheaper and quicker to clear Seymour Norte [190 hectare] than South Georgia [390,000 hectares], because scale. But also because they used drones . . . to deliver a payload of 20kg of the rodent specific killer bait. I was talking about this with Dau.II when the news was hot and she thought if might be a great crowdsourced project for the next round of elimination. Recruit teenage Call of Duty first-person shooter fans to fly hunter-killer drones from their bedrooms in Romford. The drone [L] carries a bait hopper and a GPS tracker and is operated from a ship to deliver the poison quickly and precisely. Far quicker and more reliable than a bloke with a rucksack.

Bell Labs designed the rodenticide and are talking large about how non-target species are not at risk from consuming the poison - it dissolves in two or three weeks before native birds get a chance to eat it . . . but hangs around long enough to give the rats every chance to eat a fatal dose. It's not clear which specific "rodenticide" is being used on the Galápagos. Could be any of bromadiolone, brodifacoum or diphacinone [anti-coagulants which are replacing warfarin] or bromethalin [neurotoxin]. In the realpolitik of conservation, a certain amount of collateral damage is tolerable. The project hopes to play the [rat] extinction is forever card, at least locally; so long as enough breeding adults of the birds survive then I guess some considerable by-catch is acceptable.