I was tribbing the bold Nils Chr Stenseth a tuthree days ago, for his work documenting the end of boom/bust population cycles in rodents. One of the things that encourages diversity in the finches of the Galapagos Islands is fluctuations in rainfall that affect seed abundance; some years the big-beaked finches like Geospiza magnirostris are favored but they yield to other species when their favorite nuts get scarce.

Stenseth's most recent paper has all the marks of his cross disciplinary approach and it's related to the story of Stephen J. O'Brien and bubonic plague survivors about which I wrote recently. Stenseth's team mobilised people from different disciplines and with complementary toolkits to illuminate the factors that caused the influx of rats, fleas and Yersina pestis from the steppes of Central Asia to the stews of Messina, Venice and London.  The stack of interacting species that this requires reminds me of

Great fleas have little fleas upon their backs to bite 'em,
And little fleas have lesser fleas, and so ad infinitum.
From Augustus de Morgan's Budget of Paradoxes
Which should remind Jonathan Swift fans of:  So, naturalists observe, a flea / Has smaller fleas that on him prey;/ And these have smaller still to bite 'em,/ And so proceed ad infinitum./ Thus every poet in his kind/ Is bit by him that comes behind. from Poetry; a Rhapsody. All rodents carry fleas, and some rodents are infected with Yersinia pestis, the bacterium that causes bubonic and pneumonic plague, the black death, which periodically rampaged through Europe killing thousands of people.

The puzzle is where the plague erupted from and where it struck and what propelled the disease West.  What Stenseth and Co. have shown is that, like a butterfly wing-flap, rainfall in Central Asia precipitated a cascade of events that finished up killing thousands of people half a world away. Plague historians had established many years ago that black rats aka ship rats Rattus rattus arrived at European ports (starting with Messina in Sicily in 1347) laden with fleas (normal) which were full of Yersinia pestis (pathological). The rats came ashore and died and the fleas needed an alternative host, so snuggled up in the family bed with people who died in their millions. Things quieted down when the plague bacteria had killed every person and every rat, dog and cat they could get access to. The pest then went to ground in some, possibly rural, reservoir in Europe until it burst out on the rampage again some year later. Those historians were a bit vague about where - Tuscanyshire? Transylvania? Tramore? - this reservoir was or what was the mammalian host species . . .
. . . because it didn't exist!

Stenseth's team have gone transcontinental gathering all sorts of data.  Just like he revealed an unlikely cause for population cycles in rodents, they have now revealed probable cause for the migration of Yersina to Europe in irregular cycles from 1347 and over the next 400 years.  The key precipitating event is rise in rainfall, as tracked by generous tree-rings, followed by a steep fall in the same parameter. That has the ring of truth: the productivity of the central Asia steppe is limited by water availability and a dump of rain will not only drive forward tree growth but a lot of plants which will bloom and set seed while resources are rich. In Central Asia, down Kazakhstan way, gerbils Rhombomys opimus thrive in damp warm conditions and consequently have a lot more babies. When the good times stop rolling, their fleas concentrate on the remaining gerbils and, if they are infected with Yersinia, these flea-bags help spread the pathogen outwards from the initial focus.  As the last gerbils >!coff-coff!< and die, the fleas jump ship to other mammalian hosts including domestic animals and camels.  It takes several years but travelling down the silk route from go-down to caravanserai, the fleas and their deadly hitch-hikers eventually reach a Black Sea and the trudge West turns to a sprint. 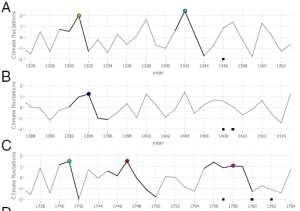 Stenseth & Co. identified original European plague-introductions by scanning the historical literature to find a plague outbreak that has had no local (<500km) plague for the previous couple of years.  That reduces the number of plaguey data-points considerably but gets a better signal-to-noise ratio.  Cross-referencing these plague start-points with the Asia tree-ring data [and having a background in time-series analysis] the scientists have found [L] many cases where the plague start is preceded by a bad-follows-good pattern in the Asian tree-ring data . . . 15 years before. This is just bonzer because it forces us all to think outside the box and because it is published in PNAS, one of the great general science journals-of-record, it will be read by astrophysicsists and nanotechnologists and inspire them to talk to people from other disciplines in the Senior Common Room. It is not impossible to criticise the paper but that doesn't detract from its value as a thought-provoking discussion document.

It's grimly topical because far-distant events are causing the dispossessed to head for Europe in frightening numbers. The current response is to fire-fight at the receiving end with razor-wire and concentration camps refugee centres. A long-term solution requires consideration of the primary causes of the migratory impulse.
Posted by BobTheScientist at 07:15