It's that damn schwə again. I think that Borrowbox has my number and probably more on the button than, say, youtube which has generated a very tiresome cardboard cutout of what I actually desire from that channel. There I was coming to the end of David Crystal's nifty Story of English in 100 Words and started casting about for the next best thing in audible erudition. Before I got bored browsing, up popped Cecelia Watson's Semicolon: the past present and future of a misunderstood mark. I'll have that, quotha! It's read by Pam Ward, who gives the book a racy, clearly articulated, voice that makes it sound like Dorothy Parker carrying the day over lunch at the Algonquin Hotel. Me, I pronounce the i in semi /sɛmi/-final because I'm not American with their /sɛmaɪ/-trailers. Ward almost disappears the vowel; hence the ə in the title. Maybe that's how all educated Americans pronounce semicolon: I can't recall ever having had a punctuation chat during my Boston years, where I could have found out. 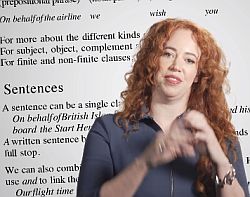 A whole book is more than most people can imagine could be written about a minority interest punctuation mark. But in a way that's an excellent reason to write one. This blue dot on which we all jostle for attention is a too often experienced as a schmeer of unbumpy trivial discourse. All those phatic G'days and What a miserable summers. Such a deadening view; we yearn for something, almost anything, to perk up our horizons. I do eclectic: islands, ichneumons, Yvonne, ice. I can usually find time for something different, especially if it's been worked up into something more substantive than a hilarious tik-tok or a laconic tweet. It's a bit like Moby Dick, a book whose semicolon use is cited with approval by Watson. Once you start following your nose down any rabbit hole you're bound to turn up something worthy of attention. Maybe not, though? I guess positive publication bias plays a part: if you dive deep down a couple of side channels and come up empty, then you move on to something which engages the attention.

For me, one of the factors about the book that commands respect is that Cecelia Watson has changed her mind on the subject of punctuation. When she was young and institutionalised she was a bit of an apostrophe Nazi. But after securing a gig teaching creative writing, she changed the direction of her red pen. Students have a hard enough furrow to plough in creating something that is true, rings true, and is original. For many of them, grammar rules, punctuation rules get in the way: sucking all the spit out of the creative juices. If you're afraid of being wrong all the time, you ain't doing science; and you're probably not doing much of anything that's worth your committed effort.

You might be surprised that semicolons and their use have a political impact but Watson makes this claim in a chapter featuring Martin Luther Knig and David Foster Whiteass. Famously in April 1963 MLK wrote an open Letter from Birmingham City Jail : "My Dear Fellow Clergymen: . . ." which contains 37 ;;;s and is consciously written in SWE Standard White Written English as a rhetorical gambit to establish empathy among one highly educated person and others similar but not incarcerated. That is, for Watson, OK MLK. A generation later, David Foster Wallace, author, teacher and public intellectual insisted that his black students must/should also write in SWE because if they wrote as they spoke [in AAVE African American Vernacular English] their words would be dismissed by the establishment and their ideas would never get any traction in public discourse. Whoa! cries Watson who makes these goddam rules about how people should communicate? The Patriarchy, exemplified in this instance by David Foster Wallace, is who. And maybe, towards the end of her book, Watson suggests that it is past time that The Patriarchy is using SWE as a bastion to keep the proles out there grubbing roots, gerunds and, indeed semicolons, from the dirt. Rather than plucking juicy grammatical, properly punctuated, fruit from the Hanging Gardens of The Ivory Tower.

Another author cited with approva; is essayist and public thinker Rebecca Solnit. One of the points made in that chapter is how hard good writers work for each sentence. How each subsidiary clause; each separate contingent idea; might involve hours or days of research and fact-checking. Semicolon the book is, must be, like that. There's something about the permanent record about a book: the idea that it will outlive the author that makes it worth a bit of effort not to be obviously wrong. Watson has written the cocktail party chatter essay Nine Things You Didn’t Know About the Semicolon if you don't have the money [$15.99] or the time [3hr:24m] for the Big Girl version.