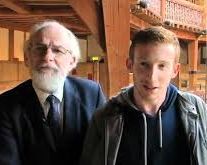 I'm not sure why I haven't written about David Crystal, Britain's favorite linguist, before this Summer. I've read a number of his books: he wears his erudition lightly but his stuff isn't lightweight. Then in the last couple of weeks, I've compared another book about language to my penultimate Borrowbox audiobook. I pronounced Crystal's The Story of English in 100 Words to be original and best. We've met his son Ben Crystal, actor and producer, using his best Shagespian voice.

Here [L] they are father & son, appropriately enough in the Globe theatre in London. David was born 6th July 1941, so I hope he gets a big cake and a bit of a knees up to celebrate this weekend. For someone who is even older than me, he seems to be right truly down with the hood, and up to date with the English language as she is spoke. In that sense he is, like Gretchen McCulloch, very much a descriptivist, celebrating how people actually express themselves, rather than a proscriptivist, nit-picking and tsking about how the young of today should be speaking. 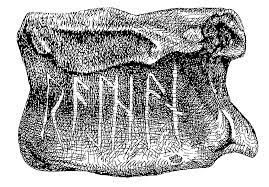 As he acknowledges in the preface, he wouldn't be the first to adopt the trope of 100 Xs to summarise Y; and in doing so he has been as idiosyncratic as a publisher and his agent will allow an old chap rich in experience with the uses of English. With some rhetorical flourish, the First Word /100 "roe"  is chosen because it is arguably the first word in English where the artifact on which it was written has survived to the present day. That artifact is an astragalus from a roe deer [pic L] found in a cremation urn at the post-Roman settlement of Venta Icenorum near Norwich. The other bones in the urn were identified as coming from sheep. Someone thought it would be helpful to carve the runes for raïhan = "of the roe". Perhaps the urn contains the remains of a chap called Raï, and this was an ironic reminder of how he got his name.

The Last Word in Crystal's book is "Twittersphere" which, given that Twitter was still in nappies when the book was being written [published 2011], is as up-to-date as can be. He has chosen 98 other words to cover the span of the language over the 1,560 years between the two coinages:

There you have it, one man's choice. Your wordage will vary, but at least this list is coherent. Another bonus is that the book is read by author. And that author is sensitive to the medium being the message, so he's compensated for what doesn't translate well from the page and used the sound-track in ways that are impossible on paper - win-win!
hh
Posted by BobTheScientist at 07:30