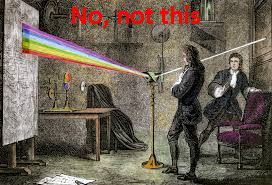 Isaac Newton was a relentlessly curious experimenter. In one investigation he inserted a bodkin in behind his eyeball to see how distorting the sphere affected his perception. Apart from gravity, we associate him with the "visible spectrum"; spectrum has become a metaphor for other "within the normal" ranges. Actually, neurotypical folk [which might include me and you - I'm still awaiting a diagnosis] tend to Other people on the autistic spectrum. Othering, especially among school-children, can involve brutal, persistent mental-and-physical hazing, teasing and bullying. It makes life harder than it needs to be for the recipients of this attention.


Diary entry Friday 12 Oct 2018. "There’s a girl on Twitter called Greta Thunberg (we’ve been following each other for a while now) . . ." In hindsight it is hard to credit that, less than 3 years ago, St Greta of Climate was a distant marginalised voice just a girl on Twitter. That entry is from Dara McAnulty's Diary of a Young Naturalist a record shit-happens, mainly in Co Fermanagh and Co Down, from Spring Equinox 2018 to Spring Equinox 2019. In the middle of the book the McAnulty family moves from one side of Ulster to the other which causes a good bit of change-anxiety for young Dara and his younger sibs Lorcan and Bláthnaid who are all somewhere on the spectrum. But here's the thing, first day at the new school Dara is met by a young chap in his class who is his designated buddy; who also shares his interest in the natural world and also the unnatural world of Xbox gaming. There are poignant entries in the diary been here a week and no bullying . . . been here a month and no bullying. Now here's the thing: how is it that one school has systemic bullying and the other doesn't? and what are a) the Head Teacher b) the rest of the staff c) the parents and d) the Department of Education doing about it before the next academic year and the start of another round of institutional inhumanity. Note Greta Thunberg was also bullied in school.

I tease The Beloved about her guru Thich Nhat Hahn being Dalai Lama Light, but that's crass and buys into the Harry Potter Winner-takes-all-ism which is the bane of fame and reputation in our current world system. TNH has a different message, different tech, different presentation, it is othering to bang all elderly meditation blokes in robes into the same ashram as interchangeable cogs in the mindfulness industry. Likewise, it is easy to dismiss Dara McAnulty as Greta-lite on the ecowarrior charts. Obvs Dara is going to get some traction in Ireland because he is Our Ecowarrior but he's got something to say for all of us who are left of the planet. He says, for example, a benison over the 70% of British house sparrows Passer domesticus which didn't leave descendants from 1970.  That's not on the red-list by any means but I remember saying ~50 years ago that soon enough there'll be nothing left but rats, cockroaches, sparrows and starlings after all life's wonderful diversity had been swept clean by whatever Miscreant Humanity had been up to in 1970.

The McAnulty book is pretty impressive for a 17 y.o. but some of the extravagant praise by such Econames as Chris Packham and Robert Macfarlane seems a bit dodgy in its sub-text. It's a little like Samuel "Curmudgeon" Johnson's [prev] — 'Sir, a woman's preaching is like a dog's walking on his hind legs. It is not done well; but you are surprised to find it done at all.'  Where you substitute An autist's writing is . . .".  One thing that I really did get from the book is an insight into one autistic mind. Dara is at pains to note that his brother Lorcan, with whom he's been sharing genes and breakfast cereal for 15 years, has a quite different autistic mind and a different external presentation also.

Buuut, in the Acknowledgements, McAnulty tips a hat to Adrian, at Little Toller, for not trying to 'adult' my voice in the editing process. Which is nice, but a sensitive editor could have done all that and yet suggested some word changes so that this blobby reader was not brought up all standing at the choice of some not-quite-right adjectives. At 17 nobody has had enough time to read enough books or listen to enough podcasts to nail the current nuanced meaning of words in English. Getting this time / experience under your belt is one definition of wisdom insofar as that is different from intelligence [hint - it is]. FWIW, Greta Thunberg's book "No One is too Small to Make a Difference" is even slighter, both in page count and content, than Dara's Diary.

I look forward to seeing this chap develop. I may even get to meet him on a raptor watch if 'my' buzzards and 'his' red kites Milvus milvus finish up on the same mountain shoulder.