It was different times when The Boy was born in 1975: no cell-phones; no internet; half the number of people. But somethings haven't changed, and the standard intermodal shipping container is one of them. I have internalised this because the first thing I saw when I dazed off the grounds of St. James's Hospital after hearing about his arrival was a Hapag-Lloyd TEU whizzing past on a flat-bed truck. TEU? = Twenty-foot Equivalent Unit. It seemed like an omen, so we added " Hapag " as the poor wee scrap's middle name.

Shipping containers were the brain-child of Malcom McLean the owner of a trucking company from North Carolina. In the early 1950s he bought a couple of WWII T-2 tanker ships [500ft 150m long x 70ft 20mbeam] and converted them to carry corrugated steel boxes port-to-port. He appreciated that sending several truck-loads by sea was more efficient that sending them severally by road. Slower, of course, but much less fuel and time wasn't crucial unless the cargo was lettuce. The first voyage of the SS Ideal-X from Newark to Houston in April 1956 carried just 58 containers 35ft long. That being the maximum load length for NC roads. One of the innovative break-throughs was to separate the trailer chassis from the box containing goods.

Many of the other engineering innovations are due to Keith Tantlinger an engineer from Fruehauf Trailers. He invented and perfected the twistlock [L] system for securely connecting containers to the transport base; be that a semi-trailer or the hold of a ship. Connectors need to be strong enough and yet easy to separate at the end of the voyage. The top joint of the twistlock is a round-cornered rectangular pyramid which fits an equivalent hole in the base of the container. a 90° turn locks the pyramid into the hole. Similar "mid-locks" can join two containers vertically. Tantlinger also invented the spreader bar so that a crane could seize one end of the container for lift and transport. Such systems only scale up if everyone agrees to standardisation, and Tantlinger was one of the key movers in this aspect of global trade. If there was a Nobel Prize for Commerce, Tantlinger would definitely have secured at least one. 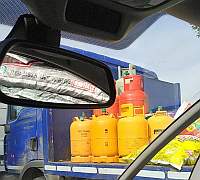 And while we are on secured loads, clock this cowboy [L] delivering fuel in Waterford. It is normal to see coal lorries with piles of Polish coal in 25kg plastic sacks on the flat-bed. It would take quite a jolt to launch a sack off the truck and onto the street and even then it would not travel far even if it didn't burst. Those gas cylinders though? Wouldn't want to be a cyclist having one of those bowling after me.

We all know about the Evergiven backlog in March. On 3rd June 2021 the OOCL Durban had a parallel-parking fail at Kaohshuing, Taiwan: colliding with a smaller moored vessel >!screeeeeeagh!< and carrying away a couple of gantry cranes. Another PoV. That put the port out of commission for a while. At the same time a Covid outbreak put the post of Kantian, China off-limits in a lockdown. 25% of all Chinese trade is funnelled through than port. More importantly, commerce has taken just-in-time inventory to the max because warehousing is a cost. This accident and quarantine has knock-on consequences across the world as ship after ship fails to meet its schedule in a domino cascade. You may have to wait for your lawn-furniture and sweat-shop shirtings.