Prologue. Many years ago, I had a week back in Boston with the family that adopted me during my PhD.  They had been attending a night class in oriental carpets and the last session occured during the week I was visiting. To everyone's surprise, the proprietor of the bazaar where the course was run, devoted much of the last session to a viva voce quiz on what his students had learned. Everyone passed and everyone therefore got a luck-penny square of carpet back for their troubles. In a spirit of inclusiveness, I was invited to try my hand and "won" a prize, too. It wasn't that hard, because (from a standing start) I'd learned a bit about carpet provenance and patterning from paying attention during the previous exams. Some day I'll be able to parlay that knowledge into a successful round at a table-quiz in Isfahan.

Sunday was Dia de Santiago and no better day for a bit of peregrinage a trek across the face of our hill. My excuse for this was the appearance of an old friend from foreign , let's call him Dan, who was in Ireland for some essential business travel and managed to ring-fence some AirBnB time locally. Last time he was here, he yomped up the hill adventuring with a a handful of his 20-something niblings rather than sacking out for tea and scones with the crumblies. He expressed a desire to tune into St Fursey's Altar which they had discovered on the last trip when it was still The Giant's Table. 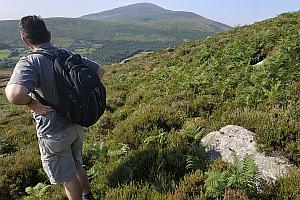 We paused at the mountain gate. I showed him [because it's my jam] <teaching-moment> the most accessible example of indents carved in a granite boulder with a stone-pick prior to splitting the living rock with wedges. The story I tell is that some young feller started an over-ambitious project only to be told by an old-timer that he was wasting his time on that rock.  A snap-shot of the process is preserved for posterity in the partially excavated line of indentations </teaching-moment>. We set off uphill on a bee-line for the Marian Year Cross via the Giolleamh Eigin a distinctive sky-line standing stone about half-way to destination. On the way, Dan paused for a "miner's view" [R] and a slug of water and announced "there's another of those stones for your project" 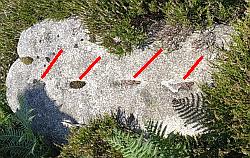 And indeed it was; although much clearer after we pulled back the overlying heather. That's a coup: at least as good as my fragment of Persian carpet. Whereas the mountainside has dozens /hundreds of these worked stones, it is perfectly possible to walk by a fine example  completely oblivious to its existence because you're distracted by midges, fraocháns, chit-chat, or buzzards. One more catch like that and we'll have to call him Hawkeye. Me? I'm delirah to add another datum to my environmental inventory, worked-stone division.
Did someone mention fraocháns? It was Fraochán Sunday and Hawkeye had been introduced to the concept by the three young girls who live in the AirBnB. When we reached the Giolleamh Eigin, I indicated a convenient bush full of the ripe berries and ate one to prove they were edible. Hawkeye was delighted and put N=6 in his water bottle to share with his young pals that evening. Just as well that he forgot all about it, because at teatime, the girls knocked on his door with a neat slice of fraochán pie which would have completely wrong footed him in the potlatch if he'd made the first move.
Posted by BobTheScientist at 07:35