I'm gradually gobbling up the podcasts from Lingthusiasm, the podcast that's enthusiastic about linguistics by Gretchen McCulloch and Lauren Gawne [prev - schwa]. I reckon that, if we knew more about how languages are used and where they come from, then we'd be more circumspect in how we speak. Although I've inducted them into the Women of Science hall of fame, the Lingthusiasts are more helpful in dealing with ethics, sensitivities and how to live tight. 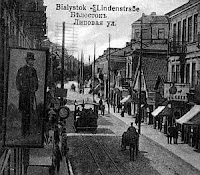 Episode 1 gets to the heart of the matter with a deconstruction of Esperanto and the invisible certainties of Ludwig Zamenhoff when he invented the first "conlang" [bloboprev]. He was born in Białystok [Беласток ביאַליסטאָק‎ Baltstogė R], a city in NE Poland, whose train-station I have passed through on my way to pick mushrooms and eat pierogi up near the Lithuanian borrrder. If you live in a place where you might need Polish, Russian, Yiddish, Lithuanian and German just to do the shopping, then you might hope for better communication among disparate people. Zamenhoff has left no direct descendants, all three of his children and their families having been done to death in the Holocaust.

Gretchen "nerdnik" McCulloch came across and started to learn Esperanto as a read-all 12 year old. But flung the book across the room when she twigged that all the names applied to women [virino] were diminutives of the cognate man-names [viro]. This shockin' casually disrespectful view of the status of women is found in German and other languages, but Esperanto was starting from a clean slate and you'd expect better. All good though; because this insight into invisible certainties helped young Gretchen develop her feminist backbone. And her rhetorical crap detector "do people who think that if we all spoke the same language we’d get along, have they ever been in a family? Have they never had arguments?" Indeed, it takes more than language to foment distrust, othering and dispute. But, heck, if you're going to paper over the cracks of interpersonal communication with a universal lingo, at least think a bit about your own bias and prejudice. And World Peace requires more work of us all.

Today I learned TIL, that to land a gig on the International Space Station ISS [prev], you must be able to speak both RU русский and US English. If you can't speak the Other, then the space agency will put you through a crash course. The astronauts and космонавты up there have a convention that each will talk in their non-native language; on the evidence that this will minimise misunderstanding by keeping it simple stupid KISS. All teachers are wary of the tendency to woofle off into technical jargon and/or longer words to show who is the educated adult in the room. Apparently the actual denizens of deep space are evolving a creole which they call Runglish. Although Peggy Whitson, an actual astronaut, who has spent months and months on the ISS, has a different take on what is the language of space.