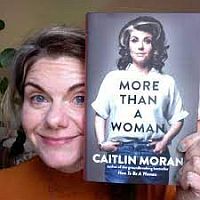 My daughters are big fans of Caitlin Moran; who done good as a journalist and public intellectual without going to secondary school. When they've read the latest Moranifesto they pass it along to me; so I've become a bit of a groupie. Her latest More than a Woman (2020) brings us to date to share some perspective from the shoulders of a 45 y.o. holding up the world. It's a journey. How to Build a Girl was followed How to Be a Woman.  The position for the latest book is the caring professionals and amateurs are disproportionately women with more and more people in need of care. Often a woman will be responsible both as primary childcare and managing the disintegration of both her parents and her in-laws . . . as well holding down a regular job to pay half the gargantuan mortgage.

My residual desire for Social Media is currently met by Metafilter where people discuss things they come across in the media and blogosphere. Metafilter leans left, USA, BLT. All the Republicans have been driven out; and those who are hesitant about vaccines don't brag about it. One of the rules of Metadiscourse is that you must rein in the desire to contribute if you don't have skin in the game. Someone will perk up with Oh no, not #notallmen again if a patriarch like me bridles at being thrown out of the bus with the latest misogynistic monster of media. There is no pain that cis-het ♂ silverbacks can experience which comes close to every day life for black folks. It must be hard to live in a world where you are ex blokio officio responsible for all the wrongs in the world.

Moran addresses with this in a What About the Men? chapter triggered by having her youngest 19 y.o. brother coming to bunk in their married couple two kids London home. This young feller's position is that it's harder for him to navigate the 21stC than it is for women of the same age and demographic. Which comes across as whiny, snow-flaky and bring back National Servicey. Perhaps because she loves her brother, Moran is able to cut him and his peer-group some slack: partly because shouting at him/them is only going to polarize the dialogue even further. And send men in droves off to their cliché pubs, clubs, soccer and Men's Sheds. Still better to be complaining about the ref while watching Match of the Day, than failing to decide between pills or hanging and taking the car out for one last reckless spin. Nobody ever buys men flowers. Men are still dressed like, and behave like, it was 1921. Their roles and their emotional life haven't evolved in 100 years except that in addition to Breadwinner they've also added plongeur, chauffeur, aupair and boulanger to their To Do list. Indeed they can't play the Breadwinner card either because Herself is out to work as well. No wonder they are bewildered.

Another group who are all sheets to the wind in a sea of troubles are teenage girls. Eating disorders and self-harm are no respecters of money or social class and there is a lot of it about. Moran's take is that teenagers have had to shoulder a burden of responsibility about the state of the world which, because young, they are ill-equipped to deal with. This is made worse by St Greta of Thunberg being out there appearing to deal with the world's existential crises and setting an impossibly high bar on other teenagers to be similarly brilliant and effective. Their parents talk about how adults have fucked over the world but that the brilliant youth of today will sort it out for us all. Whaaaaa'? why are we laying the solution on the kids?  It's really hard to work out a script for parents of a troubled teen. One thing for certain, making them responsible for the emotional distress of the parents is no help at all. Moran didn't get her head and her role sorted until her daughter was beginning to see a chink of light in a cycle of anorexia and razors. There are loads of heads out there sounding off about the causes and cures of the epidemic but talk is cheap and mis-steps are legion. But not all of them have been there - as a parent or troubled teen.

Moran has skin in the game, so is worth listening to. She deals with weighty topics with a light touch; sometimes laugh-aloud funny.  A dash of humility and hefty shake of compassion leaven the mix. The last chapter reflect on how her role is shifting from middle-aged woman to Hag. It won't lessen her responsibilities much just smooze them out a bit so they seem like a helping hand rather than an obligatory part of the daily routine. I suspect she's roughing out the chapter headings for How to Bewilder the Cailleach.