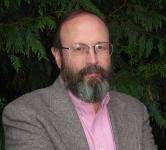 I spent the 90s pushing the frontiers of science in computational biology. That's a whopping big amorphous field but my boss had peed on a lamp-post that marked a small section of the frontier of science. I was put to work with the pick of power and the axe of analysis reducing the forest of entropy to something we could understand. I wrote - and published - some software to make our sort of analysis more efficient. But I also used existing software because research was hard enough without having to re-invent the wheel for each analysis. In the course of stress-testing PHYLIP, a software suite written by Joe Felsenstein in Seattle, I revealed a bug in one of the programs. Joe duly added my name to a list of people who'd found one for the team. Felsenstein had/has a beard worthy of other computer gods like Denis Ritchie and Ken Thompson.

I was following a peculiar self promotion story on Metafilter which reminded me that I'd had a [mortifyin' in hindsight] transaction with Felsenstein about ten years prior to my public-service debugging venture. In 1982, I had to print half a dozen copies of my PhD thesis as well as the official copies for the university / department archives. 5 of those spare copies came back to me, because my thesis committee didn't need a permanent record of the labour. In my intense echo chamber, I thought my stuff was important and interesting and sent each volume out to people whom I admired in the field of computational biology. The only person who replied [it was before WTF? was a thing] was Joe Felsenstein at U.Washington, Seattle, who said . . . he'd passed it on to a Canadian graduate student because "Canadian Maritimes" appeared in the title.

I tell ya, science is largely one enormous futility closet. You work away for a year, or three, or four, stumbling around until to find your feet and a compass and, after much effort you write the results up in a single manuscript. This document has to be written to a rigid format in peculiarly stilted language. Most scientific papers, despite the imprimatur of an editor and two independent peer reviewers, sink almost without a ripple.