Of all the trees that are in the wood the most huggable, for me, is the ash fuinseog Fraxinus excelsior. Last to show leaf in Spring and first to shed in Fall, the mature trees provide shade from the sun. If forage is short, I can cut down a branch for our sheep who will pile in and strip it bear in a feeding frenzy. In contrast to hawthorn sceach Crataegus monogyna, ash trees never blow over because their roots are strong and deep. The branches do tend to break in storms though and you shouldn't park the car under an ash tree if a big wind is forecast. In my days of making objet trouve anthropomorphic sculptures ash and hawthorn both played their part. And all those fallen ash branches have, over the years, been sent up the chimney of our wood-burning stove. The twigs make excellent kindling, the branches provide a graded series of small to big logs and the really large lumps split cleanly in a most satisfying work-out. We've never had to cut down any tree for fuel, everything comes down of its own accord. 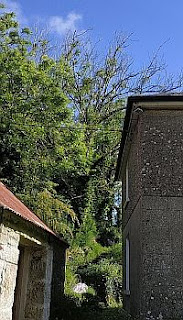 That looks like it is about to change because the dreaded ash die-back has arrived on the farrrm. Crap is the photo is, you can see the symptoms clearly in the canopy of the tree pictured [L, R next to the house]. <Look, no leaves!> This is caused ultimately by Hymenoscyphus fraxineus, an ascomycete fungus first described in 2006. The tree [L, L] above the red-roofed shed is also ash, but not so badly infested. It looks like ash, as we know it, a distinctive and valuable species familiar across Europe, is likely to follow the elm Ulmus procera which was extinguished by Dutch Elm Disease in the 1970-80s. DED was also caused by an ascomycete fungus Ophiostoma novo-ulmi but also required the intervention of bark beetles including Scolyus scolytus. For ash-dieback otoh the fungal spores are wind-dispersed and effectively impossible to interdict.
The best we can hope for is that there are strains of Fraxinus which are naturally immune to this specific fungal species. It is certain that H. fraxineus jumped the species barrier from trees which had long ago come to an accommodation with the fungus. One of the silver linings to the continuing disaster which is Covid-19 is that I can use comparative immunology terms like jumped the species barrier which would have needed a paragraph of explanation when I started blobbin' back in 2013 when nobody had heard of  武汉 or knew the Latin for pangolin. I hope that there are plant pathology labs across the world which are getting funding to study the effects of anti-microbial peptides AMPs on fungal hyphae. Better still if the AMPs come from Fraxinus or Fraxinus-adjacent trees of the Family Oleraceae. You don't see olive trees or lilac copping a dose of die-back - that might be a place to start.
Posted by BobTheScientist at 07:14