When we bought the house in which we raised two girls, we acquired a rattle of miscellaneous hardware as well as the house, sheds and fields. Not as much hardware as was present when we first viewed the place in 1995. In the year between expressing an interest in the property and actually being top bidder at a public auction, one of our enterprising neighbours invited some travellers to make him an offer on the moveable goods. Whether the vendors had an interest in these chattels or whether we got them by default, it's pretty clear that the neighbour had zero rights to the cash value. So the more serviceable tools and bits of furniture were gone by the time we started camping in the yard and cleaning up the site in Spring 1996. In the light of my subsequent interest in the granite, I do rather resent the loss of a robust stone sled for drawing rocks to the edge of the field, or indeed to the yard for breaking into building stone.

What was left was a clatter of random bits of iron and timber, some of which had a clear purpose and others not. I was delighted to give a couple of horse-ploughs to the teenage son of a farming neighbour. The lad had a found a similar contraption in his grandfather's barn and was determined to learn how to plough a furrow as straight as the old man. Our ploughs were as much for 'parts' or mix&match as the thing itself. And the following year, the chap did indeed win a prize at The Ploughing.  A month ago, The Beloved was clearing out one of the sheds because we are anticipating a trip to the scrap-metal man and The Dump. In my iron-mongery corner, I turned up this severely rusted tool head. It is a cross between a sledge-hammer [weighs about 4kg] and a pick-axe [pointy ends] and I had no idea what it's original purpose was. 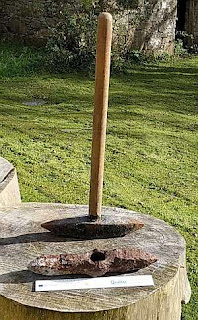 Then as part of my Holistic Landscape Heritage Project, I started to talk to informants: people from tourism; national monuments; the forest service; historians; authors; foragers; artists. I have time-sheets for 15 hours of dialogue with these experts. One of them, a man in his late 80s, brought me into his home and talked and answered my questions about The Granite. I actually went to visit twice because the first time he'd promised me a stone-pick and then we'd rambled off round hill and dale and he forgot to hand the thing over. So he sent me a >!letter!< asking me to call again. I did so the next time I was in town. When I saw it [L] standing on his kitchen floor, I knew immediately that I already had one! Obviously not in as good nick. This tool is used to make the row of indentations in the top face of a slab of rock, so that the wedges have something to settle into. The handle is short because this is a precision tool - you wouldn't raise it above your head, for instance. Indeed it is designed to let gravity do the work. I can't wait to go up on the hill to see if I have what it takes.

otoh, like The Ringstone, I feel that I am only borrowing this tool and will be happy to pass it on to someone younger, fitter and more passionate than me. That's more or less what the donor said when he gave it to me. His children have their own lives and currently no interest in the contents of their Ould Fella's shed, or even much interest in the contents of his head. It would be nice to pass it back to the family if one of the grandkids gets an interest. They'll know where we live!