PhenylKetonUria PKU is a rare [1 in 10,000 live births] "inborn error of metabolism". It is caused by a defect in the gene PAH which means insufficient availability of an enzyme phenylalanine hydroxylase. And what that means us that phenylalanine / Phe / F one of the 20 amino acids that are the building blocks for proteins cannot be converted to Tyrosine / Tyr / Y. Absent PAH, Phe is processed by an alternative pathway to phenylpyruvate and phenylacetate which accumulates in the body to toxic levels with terrible progressive effects on the growing child = hyperactivity, seizures, mental retardation, eczema, learning difficulties. Clinician know what condition they are dealing with from two characteristic symptoms a) the strange musty-mousy smell of phenylacetate b) super pale hair and skin. The pale skin is because tyrosine is an essential precursor for the production of melanin the tanning and black lives matter pigment. Getting the disease is rare because carriers of the banjaxed gene are rare but still about 2% 1:50 of the normal singing-dancing population. It's one of the arguments against falling for your first cousin [or your sister!].
The disease was described by Ivar Asbjørn Følling, a Norwegian doctor, in 1934 but it wasn't until [I was born] 20 years later that a neat cure, based on a low Phe diet, was developed and rolled out at least across the developed world. 20 years after that, I was in college and I attended a lecture on the utilitarianism of health interventions. In Ireland, 60,000 children are born each year (it was the about same in 1975: smaller base population + higher birth rate). On average 6 of those will have PKU, which if detected early and The Diet implemented religiously, will have a fine fulfilling life in society paying taxes. If not detected, those children will be a handful needing a lot of support and/or being put in A Home. Call that €100,000 a year each or €600,000 every year to the tax-payer. You can detect PKU reliably by taking a blood-sample with heel pin-prick and a Guthrie Card and getting that processed at the National Children's Hospital. That costs €10 a pop or €600,000 a year. So Guthrie cards pay for themselves in the first year . . . quite apart from immeasurable benefits of having a healthy child rather than one who is deeply compromised. 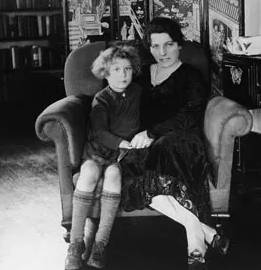 I am currently reading Carl Zimmer's She has Her Mother's Laugh: The Powers, Perversions, and Potential of Heredity which is excellent. Written for Jo Public but full of information which I, a professional geneticist, although no longer near the cutting edge, found interesting and informative. One of the early chapters is about Pearl Sydenstricker who grew in China with her missionaring parents. She grew up and married an agronomist Lossing Buck and their daughter Carol [shown R] was born in 1921 with blue eyes and straw-white hair and increasingly troubling distressing behaviour. The marriage didn't survive that jolt and Pearl was left holding the baby. She needed to earn money to support her micro-family and turned to writing novels, the second of which The Good Earth became flavor of the month, Book of The month and won her a Pulitzer Prize (1932) and a Nobel Prize (1938).
Having grown up foreign, and fluent in Chinese, Pearl had zero tolerance with labelling people, especially children based on their skin pigment. She co-f[o]unded Welcome House an international interracial adoption agency which went on to place 5000 orphans in homes where their future was brighter than a Third World orphanage. I think of her life [2010 biography] as being a bit like The Verger's: if Carol had been born without PKU it is unlikely that her mother would have written her best seller and gotten it published to such acclaim. And without the acclaim, there would have been no money or drive for Welcome House. In that sense Carol took one for a team 5,000 strong. tsk! more Utilitarian reasoning!
Posted by BobTheScientist at 07:18