How quickly they forget

Norbert Peter "Nobby" Stiles is gone: done to death by vascular dementia and prostate cancer - a heart attack and a couple of strokes didn't help. He was born 12 years before me and was a peculiar sort of a role-model for middle-class me on the soccer pitch. I've never been a centre-forward; neither in soccer nor science but I was good at intra-structure - the unglamorous bump-and-grind on which the star players, indeed the whole edifice, depend. Stiles was a mid-fielder, famous for taking, and retaining, possession of the ball. He were well 'ard. I played left-back and my blunted affect, and I suppose physical courage, developed into a rep for closing forwards out, not to say cutting them down, with brutal tackles. When you're all 11 years old there is a lot of elasticity and bounce and the bruises were superficial if always with us. I was never serious about soccer or sports; although my expensive education required a lot of engagement on pitches and courts.

Come the 1966 World Cup, I was 12 and really still not tuned in. I remember catching fragments of the Final on the car-radio as my father and I drove about town doing some light shopping [legs for a coffee-table was one item]. Stiles had achieved lasting fame during the semi-final between England and Portugal. He was tasked to mark Eusébio who was, along with Pelé of Brasil, the most talented player of his generation. Stiles had already done a number on France's Jacky Simon. Nobby, playing #4, was always in the way when the Portuguese wanted to mobilise their asset. England won 2 -1. It was unglamorous but effective. And no hard feelings 60 years on: 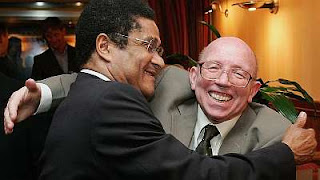 The English Football Association and Manchester United are resolutely looking the other way when the very idea of a connexion is raised between head-the-ball and dementia via CSE contact sport encephalopathy. The Suits of Sport want a Win because winners get all the money in sport and the Suits suck up as much of it as they can. But they also want to come up squeaky clean as well; bringing up the sludge [brutal tackles, brain damage, doping, boozing, 'domestics'] soils their white gloves and spats and is contained and buried if at all possible. My reading says that Man.U. treated Nobby Styles shabby after they'd wrung him out and tossed the husk on the garbage heap of history. So any fulsome accolades from that direction in the week after the old man's death should be taken with a big pinch of sal hypocrites. Tackling dementia promo.