Enough is as good 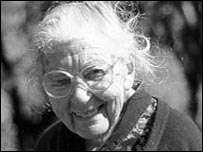 . . . as a feast. Or, actually, enough is better because it is now so easy to get too much; if we're talking about food [we are: 'feast' is a clue]. It wasn't always so easy for poor people to eat too much because, when my folks were growing up in the 1920s, food was expensive: as marked by the proportion of their income which was devoted to food. Even since 1980, average food budget has halved from 28% to less than 15%. There's a strong argument that the Brits were better fed in WWII under rationing than at any time before or since. Those rations were arrived at empirically and so evidence based; and a large part of that was due to  Elsie Widdowson [R, later] and Robert "Mac" McCance a pair of Cambridge nutritionists and physiologists. They wrote The Book: McCance and Widdowson's The Composition of Foods.

Elsie [b.1900] grew up in SE London where her father was a grocer's assistant. Elsie and her sister Eva got into Sydenham Grammar School because their parents recognised that the girls were bright and bookish and curious and could do better than serving behind a counter. They both went on to get a parcel of academic degrees. For her PhD Elsie analysed the sugar content of British apples as they developed from flower to fruit, she recognised that the process of measurement reduced the content of some sugars and so these were usually under-estimated. McCance was a medical doctor with an interest in diabetes and homeostasis in the composition of body fluids. Their complementary interests and skills grew into a 60 year collaboration which generated thousands of accurate, reproducible measurements and hundreds of papers about diet and nutrition.

Since the industrial revolution of the 1700s and 1800s Britain had ceased to be self-sufficient in food. British workers produced knives & forks and table-cloths for export and got bananas, butter, wheat and sugar in return. In 1939, it was realised that 2/3rds of British food appeared over the horizon in the holds of ships. This deficiency was a concern given the experience of submarine warfare in WWI. McCance and Widdowson were tasked to determine if it was possible to feed the nation without relying on colonial and US food imports. The first step was to determine what was the minimal sustainable diet; recognising that diet was more than mere calories. They determined that IF, on average, everyone got

THEN they'd be fine. They knew this because they tried that diet for 3 months and found that they were still healthy and happy and indeed fit enough to go on a mighty yomp across fell and dale in the Lake District. A diet primarily of cabbage and spuds wrought some changes: mighty floaters un the t'ilet [a joy for Denis Burkitt] and a miasma of sulphurous farts. Train-travel must have been a trial for the other passengers. But soon enough there were no other passengers because rationing was instituted and everyone was in the the same intestinal ferment.  Of course there was unfairness: my grandfather got both the eggs each week and those with money could avail of a busy black market in desirable commodities. But the baseline meant that everyone got enough and most didn't get too much and general levels of health improved.

Their initial findings needed some tweaking because some deficiencies took more than 3 months to manifest. It turned out that phytic acid in wheatgerm chelated dietary calcium, making it unavailable for absorption. This only became apparent because the war-time diet was so restricted on dairy. The solution was to spike flour with calcium [and iron, niacin and thiamine] so that enough got through for healthy bones. They travelled to Dublin and met deValera as consultants after an out-break of Irish rickets. The Irish government followed the food-adulteration policy of the Brits and brought rickets under control. Widdowson and McCance also realised that women and children were not just smaller men but had slightly different dietary requirements - proportionately more calcium for starters.

Late in life Dr Widdowson endowed her BSc Alma Mater Imperial College with an Elsie Widdowson Fellowship which allows staff returning from maternity leave to have a year without teaching, so they can get their research back on track. She was a committed Christian and fond of citing, from the Book of Daniel Ch.1, the first experiment in dietary health:

More women in Science
Posted by BobTheScientist at 07:10