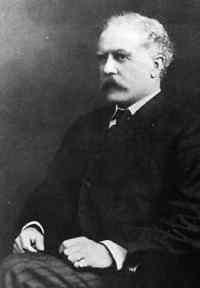 When I was learning genetics in the 1970s, it wasn't quite possible that an ambitious graduate would know ALL there was to know in the field; but it was surely a lot simpler and less extensive back then. The half dozen standard text-books all re-hashed the same war stories to illustrate the most exciting or the most fundamental aspects of genetics. One well-worn story was about resistance to malaria effected by being a carrier for the haemoglobin variant that causes sickle-cell anaemia. That revelation was largely the work of a single medical geneticist called Tony Allison. Another of the paragons was Archibald Garrod [R as a suited Edwardian walrus] an English physician who pioneered the field of inborn errors of metabolism. We would call them genetic diseases now. The deal is that: 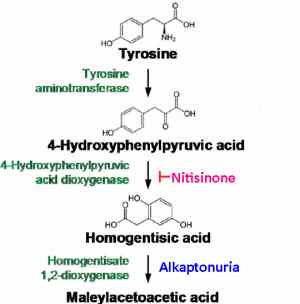 What is remarkable about Garrod is that he worked out the genetics of Alkaptonuria and published it in 1902. This was barely a year after Carl Correns, Hugo de Vries, and Erich von Tschermak-Seysenegg rediscovered Mendel's laws of inheritance. Effectively, when Garrod started his investigations, there was no useful knowledge of Genetics, so he was working blind. Alkaptonuria is rare, distinctive and peculiar. The most obvious early symptom is that patient's pee turns black in the piss-pot which must be disconcerting  when first noticed. As these symptoms kick in before weaning, it is the parents who are distressed. Garrod didn't know what the biochemical cause was, but he mapped out pedigrees and proved that it was inherited as an autosomal recessive. That phrase means that the disease is a) as common in boys as girls b) it requires both parents to carry the defective gene. Years later, it was established that the black stuff was homogentisic acid; a metabolic breakdown product of the amino acids tyrosine and phenylalanine. It gets peed out because a key enzyme in its metabolic pathway, homogentisic acid 1,2-dioxygenase, is missing or defective. There is no cure and the disease is progressive: the homogentisic acid can't all be forced through the kidney tubules, so the toxin accumulates in the joints, under the skin,around the heart valves and in the eyes. It's a bit like gout, therefore, where uric acid crystals accumulate in joints. Longevity is not affected but quality of life definitely goes downhill and modern treatments involve hip and knee replacements when these joints become too painful to use. Phenylketonuria PKU is another inborn errors of metabolism from the same aromatic amino acid degradation pathway. That condition is identified within hours of birth with a heel-prick test to yield a few spots of blood on fiche of blotting paper.

Being of historical interest and colorful is not sufficient to trigger a Blob on alkaptonuria but a four page article in last week's Nature adds sufficient weight. A father’s fight to help his sons - and fix clinical trials - Nick Sireau’s quest to give his sons weedkiller could help thousands struggling with rare genetic conditions. That about sums up the sensational aspects of the essay. The problem is that nobody should want to 'fix clinical trials' unless it is the share-holders and sales-force of the pharmaceutical company which is marketing the therapy. Mr Sireau's boys were born with alkaptonuria and he was determined to find a cure, preferably before the lads grew up and started to show the worst of the symptoms - typically in their 30s.

There is a cure, of sorts, but because alkaptonuria is so rare it is hard to get sufficient numbers to carry out a clinical trial of its efficacy. Nitisinone [structure L] also interferes with the correct function of the tyrosine degradation pathway but one enzyme upstream as shown in the metabolic pathway [above L]. Under this drug's regime there is no accumulation for homogentisic acid because there is no accumulation of its immediate precursor. This means that other tyrosine degradation products, from further up the chair, do accumulate. Although the diet can be restricted to minimise the intake of tyrosine and phenylalanine, and that helps also.  The pathway, as we now understand it, shows just how complicated things can be to keep things turning over and keep essential nutrients like tyrosine and phenylalanine in homeostatic balance - so that they are present in just right Goldiloxian amounts. And for most of us, most of the time, it all works nicely, but disable any one of the multiple steps and the whole elaborate pipeline is banjaxed.

Nitinisone costs about $50,000 or $60,000 per person per year and they've done the figures on using it to treat Type I Tyrosinaemia a disease caused by a defect in the same pathway as alkaptonuria and PKU. Mr Sireau believes that it will have positive effects for his chaps but there is no good evidence that it makes the adverse symptoms measurably better. The US Food and Drug Administration FDA won't allow the drug to be marketed without that sort of positive benefit data. Nobody should be allowed to pay so much for something that doesn't work. Especially, this should be stopped if somebody else is picking up the bill. It seems that Sireau's advocacy group has blagged the European authorities to accept a less standard of 'success'. If, under treatment, the concentration of homogentisic acid falls significantly then that will be enough - it will be what is called a surrogate marker.  We-the-tax-payer will then start paying for the drug regardless of whether the 'real' adverse symptoms like pain, joint flexibility, heart dysfunction, eye disease improve. If it don't work; don't pay for it. It's better to grimace and bear it without treatment than to grimace just as much and be out of pocket. I dunno, I'm not certain about the ethics or economics here: you read the Nature piece and decide where you want your share $50,000 allocated. Trolleys? More nurses? Pay-hike for nurses? Mental health? New children's hospital? OR "I'll keep my share of tax-dollars, thanks very much, less tax will mean I can build my much desired (and to be admired) gazebo in the back garden"

A final grimace and bear it irony. Archibald Garrod had three sons. They all joined the army in WWI and they were all killed: Thomas 10th May 1915; Alfred 20th Jan 1916; Basil  4th Feb 1919 (Spanish 'flu). No amount of money could save them.
Posted by BobTheScientist at 07:27