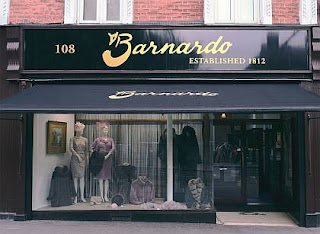 Q.ho knew there was still a whole industry for making fur coats?
A.nyone who walked down Grafton Street in the middle of Dublin.
JM Bernardo and Sons, furriers to the entitled rich, is a peculiar anachronism surviving into the 21stC without getting fire-bombed by animal rights activists. Fur coats are in the news this month because it turns out that American mink Neovison vison is particularly susceptible to SARS-CoV-2 and several mink farms in Denmark have been sharing the virus across species between the caged beasts and the workers who breed, feed and cull them. 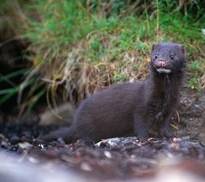 Beyond being in the same family Mustelidae of the Order Carnivora, European mink Mustela lutreola are not particularly closely related to their American cousins N. vison. If you see mink darting through the underbrush on the banks of the River Barrow, and you do, those are certainly Neovison, descendants of mink liberated from fur-farms by activists or criminally negligent farmers. Because mink look cute  [R] but are serious predators of rodents, frogs, crayfish, ducks and chickens. In real life, each meal is hard won; in a hen roost at night "surplus killing" can occur which is wasteful if the poulterer is too squeamish to make an enormous coq-au-vin and invite the neighbours in.
Javi [prev] our first au pair from Spain was made of sterner stuff. One afternoon he heard a commotion in the lane and was quick enough to see off a fox who was in the process of killing one of our hens. The bird expired in his arms and he brought it up to the yard to pluck and process. For all his aspirations to be a man of the woods, he'd grown up in suburban Madrid and never plucked a hen before. We had The Beloved's grandmother [since passed on] staying with us, she'd been hen-plucking all her life but was now blind but was free with her advice and critique. Great trans-national comedic potential and a drift of feathers. Eventually, the bird was cooked; it was tough.
There is some concern, largely allayed with accumulating data, that the mink strain of the virus might either a) by-pass the currently developing vaccines b) produce an increase in mortality and morbidity in people who contract it. As with foot-and-mouth, and tuberculosis, the blunt instrument solution to finding that mink is a reservoir of SARS-CoV-2 is to mandate the culling of all the mink in captivity in Denmark. That's a huge logistical problem because at steady state there are 17 million mink living a dull and stressful life in little cages across Denmark. A mink weighs about 1 kg, so that's 17,000 tonnes of mink carcass to process. That's an aperitif compared to the amount of dead pigs which get factoried each year in Denmark but it's still 400 x 40 tonnes trucks to go from farm to wherever they process dead meat. There are 3 mink farms in Ireland [200,000 animals] and 80% of people in the country think the whole enterprise should be shuttered forever. The Brits banned fur-farming 20 years ago. Don't play me the cruelty card if you pay less than €20 for your Sunday chicken.
Well, really, and, like tsk! who would want to wear a fur coat?? 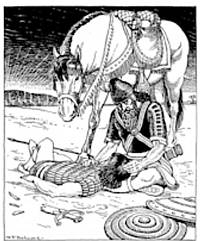 That would be me! Or rather my younger self. Just before I left England for college in Dublin in 1973, I was given a mid-calf length fur-coat. Not mink, but decidedly down-market muskrat Ondatra zibethicus. A friend had bought it for a jape in a charity shop and decided to would be a better fit for me. For reasons which baffle me now, I decided that this was an essential piece of kit for my new life studenting. I don't think I was wearing that coat the night I met The Beloved, so it must have been something else that made her throw her cap at me. But that coat became part of our lives, we christened it Sohrab after the epic Victorian poem by Matthew Arnold [prev Dover Beach] Sohrab and Rustum. S&R is a tragic tale of too much testosterone, mistaken identity, plumed helmets, jingling harness, exotic locations and ultimately <dang!> filicide.
Here's Sohrab getting up:
Sohrab alone, he slept not; all night long
He had lain wakeful, tossing on his bed;
But when the grey dawn stole into his tent,
He rose, and clad himself, and girt his sword,
And took his horseman's cloak, and left his tent,
And went abroad into the cold wet fog,
. . . 120 lines later, here's Rustum:
And Gudurz enter'd Rustum's tent, and found
Rustum; his morning meal was done, but still
The table stood before him, charged with food—
A side of roasted sheep, and cakes of bread,
And dark green melons; and there Rustum sate
Listless, and held a falcon on his wrist,
. . . 200 lines later, the denouement
But Sohrab heard, and quail'd not, but rush'd on,
And struck again; and again Rustum bow'd
His head; but this time all the blade, like glass,
Sprang in a thousand shivers on the helm,
And in the hand the hilt remain'd alone.
Then Rustum raised his head; his dreadful eyes
Glared, and he shook on high his menacing spear,
And shouted: Rustum!—Sohrab heard that shout,
And shrank amazed; back he recoil'd one step,
And scann'd with blinking eyes the advancing form,
And then he stood bewilder'd; and he dropp'd
His covering shield, and the spear pierced his side.
. . . 80 lines more, the rapprochement
"O Sohrab, thou indeed art such a son
Whom Rustum, wert thou his, might well have loved!
Yet here thou errest, Sohrab, or else men
Have told thee false—thou art not Rustum's son.
For Rustum had no son; one child he had—
But one—a girl; who with her mother now
Plies some light female task, nor dreams of us—
Of us she dreams not, nor of wounds, nor war."
etc. etc. turns out the mother had told the father than she'd birthed a girl to protect her child from the tragic fate which unwittingly she'd brought upon his head. There are further ironies in that the R Oxus, on the banks of which the drama of Sohrab's death played out, finishes it's journey thus:
The shorn and parcell'd Oxus strains along
Through beds of sand and matted rushy isles—
Oxus, forgetting the bright speed he had
In his high mountain-cradle in Pamere,
A foil'd circuitous wanderer—till at last
The long'd-for dash of waves is heard, and wide
His luminous home of waters opens, bright
And tranquil, from whose floor the new-bathed stars
Emerge, and shine upon the Aral Sea.
In Sohrab's time, and centuries later, in Arnold's, the Oxus bled at last  into a tumultuous sea. It took just two generations of Stalinist delusion and centralist Marxist economics to turn the Aral Sea into a desert of salt pans and wreckage.
Sohrab the fur coat had a far less romantic end. At some stage in the 70s we left the coat with Pat the Salt for safe-keeping little appreciating that his life was becoming almost as peripatetic as ours. At his next house move, the ratty old fashion accessory finished up on a bonfire of the vanities along with a bunch of other stuff.  Probably better thus. From Århus to Oxus in 5½ minutes - that's The Blob.
Posted by BobTheScientist at 07:16