I appreciate that there is no free lunch and I've started to cough up some money to support information sources which remain Ad free. And I've also stopped reading copy where there is more acreage of Ad than text in any page. Thus 3quarksdaily has been shown the door, as has neatorama except on a very slow weekend.  It wasn't strictly necessary but this year I did $€nd $om€ $pons to Metafilter and Wikipedia and the Grauniad. On the latter, I'm a bit out of training because until I did send some finance, my conscience wouldn't allow me to browse their content. I don't know if their pages are algorithmically tailors to deliver warm certainties and  chamber-echoes to a sixty-something SWM patriarch.

But, maybe because I'm partial to a little ham, I found myself clicking on the Danish meat ban story.  What a sorry farago that has been. Last year, the deputies in the Danish parliament, felt they had to do something to reduce the nation's carbon emissions. We are required to do our bit for the planet and our grand-children (if any!). It doesn't have to hurt [our health or the economy or our lifestyle] IF we /they can implement some super technical efficiency finagle within the time-frame. Nope, I didn't think so . . . so it will hurt a little. You /me/ we/ the Danes will have to put a stop to our gallop and calm down the self-indulgence. Or there really won't be much left in 2050 but crisps.

The Danish legislators are working a democracy, so they are loath to compel citizens to do anything . . . except pay taxes. So long as everyone pays that . . . [ and therefore the roads are smooth; the trains run on time; sewage doesn't back up in the bathroom; single parents, drug addicts, pensioners and refugees get a little support; ] . . . everyone can do, go, say, think, read, eat, what they like. But they have a little bit more control over those who suck directly on the government teat. Partly because animal agriculture, in Ireland and Denmark both, is a significant contributor to the carbon footprint; partly because it would be leading from the front; partly because it would make everyone's life more interesting; they mandated two days a week meat-free in all canteens in government buildings, where the civil servants eat subsidized dinners.

What's the worst that could happen if the Danes embraced such a plan?
Well we'll never find out because a shit-storm of indignation was raised by trades unions; pig-farmers; sustainability talking-heads; the Danish Agriculture and Food Council; and a coven of deeply unimaginative, costive, carnivorous dinosaurs . . . and the government backed-down and made it voluntary.

Been there done that in Ireland last year, with similar climb down before the gods of food tech and the €3 chicken. 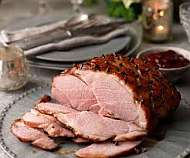 So much depends
upon
a baked
ham
glazed with
marmalade
beside the white
chicken
not forgetting
roast
potatoes and
gravy
prev: William Carlos Williams
[Red wheelbarrow]
Posted by BobTheScientist at 07:37