. . . a love and respeck letter from one runner to another. We've met them both before. Richard Askwith's Feet in the Clouds is the tale of a London journalist who is invited to go hillwalking one weekend. It's a long drive on Friday night, Saturday dawns with drizzle, his pals set off up the target hill, he tags along with increasing grumpiness, he's wet, and cold, and unfit and is quite pissed off when they finally get to the pointless peak. And then, with magnificent natural theatre, the clouds are swept apart and the lads are treated to a panorama of The Whole World [Matt 4v8] and Askwith is hooked. 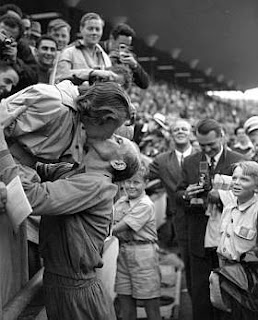 I wrote my tribute to Emil Zátopek for Sunday Miscellany before The Blob and hinged it on the miraculous fortnight in Helsinki 1952 when Zátopek won gold for the 10,000m, the 5,000m and the Marathon, and his wife Dana Zátopková [b. Ingrová] won gold for the javelin. This [R - czech out the two chaps with their eyes on stalks] is one version of The Kiss immediately after Emil powered into the stadium Eclipse first the rest nowhere to win the marathon. It was the first time that he had raced at that distance. But he was an early adopter, if not the inventor, of interval training where he'd run many many multiples of 200m and 400m sprints.

I've just finished reading Askwith's 2016 book Today We Die a Little: The Rise and Fall of Emil Zátopek [Grauniad interview; Waterstone's retrospect] which is 200x longer than my vignette on The Blob. There is of course more detail in the book and it's more nuanced in its adulation. Zátopek's fame rests partly on his loyalty to fellow Czech athlete Stanislav Jungwirth who was deemed politically unsound days before the Helsinki Olympics. Zátopek risked his own ticket [and the gulags] by insisting that he wouldn't fly unless Jungwirth went with him. That's the stuff of heroes, as much as being able to go Citius, Altius, Fortius.

But that moral backbone doesn't sit well with a letter to the press written in 1950 by Captain Zátopek which comprehensively agrees with the grotesque judicial killing of Milada Horáková, a respectable political dissident who spoke the truth to the power of the Communist Party, In 1968, the new First Secretary of the Communist Party Alexander Dubček implemented a new policy "socialism with a human face" which initiated The Prague Spring a local thaw in the Cold War. It encouraged freedom of expression, liberalisation of state control of everything, and economic diversity. It was very popular in Czechoslovakia and seen as the beginning of the end in the West until at midnight on 20th August, tanks and APCs from the other Warsaw Pact countries rumbled across the border and occupied the country.

Zátopek had been prominent on the streets of Prague and was an iconic figurehead of the reformists. But at a crucial time as the Spring was crushed, he recanted, much to the disgust of those who didn't. Nevertheless, he was dismissed from the army and the Communist Party without a pension and spent five years in exile in Moravia working as a laborer for a geological exploration company. He was eventually rehabilitated and survived to see the collapse of the Iron Curtain in 1989 and the development of a capitalist liberal democracy in Czecho and the other countries of the Warsaw Pact. In the recriminatory aftermath, it was suggested that Zátopek had been an agent provocateur, a stooge for The Party and spy for the Stání bezpečnost StB, the state secret police. Statistically, this would not have been an outrageous suggestion because one estimate has it that 25% of the state's citizens were bearing tales to the StB. But Askwith, with Dana Zátopková's permission, spent days and days in the StB archives sifting through the evidence for such a denunciation. And >!phew!< came to the conclusion that Emil was a little naive politically but not a monster.  It is also possible that the letter to the press about Milada Horáková was written for Zátopek rather than by him. It's pretty clear that many of his party loyalist speeches at youth clubs and factories were scripted because they were so dull dull dull.

So I buy it! Zátopek was a card and a character and worked so hard to achieve his athletic prowess. But he was running much more against his own inner compass than to crush his opponents. He was friendly, hospitable, funny, and generous and those feathers weigh well against the snark and bitterness of those who were less successful in the race.