The latest fash-gadge the iPhone 12 was launched last month without a wall charger. Apple tried to make it a win for the environment because "everyone has an iPhone charger already"; and excluding that lump from the package will allow more boxes per pallet and that will mean fewer carbon-footprint deliveries to the big box stores. Yer, maybe. It's as likely a bean-counter's way of shaving the margin like the finance whizz who calculated that American Airlines could save $100,000 a year by adding 3 olives to the in-flight salads rather than 4. Indeed it could be both: win-win Apple!

Marketing: what a game! largely without shame. 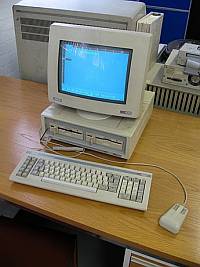 When we bought our first desktop computer, an Amstrad PC1512, in the late 1980s it came fitted as standard with two 5¼ inch 360Kb floppy discs: one for MS-Word and the other for the document. And inside the box was 512Kb of RAM. That's kilobytes not megabytes. People with a lot of money could install a 10Mb hard drive. Just to emphasise: there are single pictures on my smart-phone which are 10Mb in size. As well as the box, the monitor, the keyboard and the mouse, the package included a Manual. That was several hundred pages long and tried to cover all the eventualities so that users would have the best experience possible and recommend Amstrad to all their pals. It had a nifty list of keyboard short-cuts which I have been touting ever since. Later versions of our home computer - jakers we must have had a dozen over the last 30 years - didn't bother with a manual. Presumably on the same logic as Apple's, that everyone had one in a drawer somewhere. I know I kept that manual, at least till the end of the century because it was still useful. 5¼in floppies became 3½ stiffies became Zip-drives became CDs became DVDs became USB-keys became The Cloud where your whole life is available to FAANG. I've boxes of these media in the attic with no kit to read them.

Now everything is on-line, of course - except the bits that aren't. It's really difficult to find information about early-to-mid-20thC women in science for example without going back to old fashioned research in the stacks of a really good library.

And hardware moves on in a planet depleting way: how many features on your car are essential to getting you from home to work and the weekly shop. Central locking? Button-windows? Reversing cameras with added beep? All these things come fitted as standard without giving thrifty punters the option of doing things on the cheap. And don't get me started on toasters!

Living remote we have feeble cell-phone coverage [watch me fire out the front door holding the phone aloft to catch the rays and launch an e-mail] so we need a land-line in case Zombie Apocalypse. Successive wireless phone-sets have [taken a lightning-strike and] died and this unfashionable medium now costs €80 to buy from Argos. Last night I was upstairs and three times missed the evening call-in from Cork, so we need an upstairs hand-set. If you have a spare phonio in your attic . . . ?