Think back to your own experience of, say, learning Irish in school. I have good friends who are ardent Gaeilgeoirí, and I take my hat off to them, not least because they have been at pains to send the language up the generations to their own children, at least. But the vast majority of adults in Ireland would struggle to order a loaf of bread, some size 9 wellingtons and a packet of chipboard screws, in Irish. And that after 12 years of formal schooling in the language. Part of that was because the teaching of Irish in school is resolutely un-cool and focused on grammar and the dealings of old people long-dead, like Peig Sayers. Assertions that she was "one of the greatest woman storytellers of recent times" were met with skepticism or derision; and when the last exam was taken, that was it for Irish. 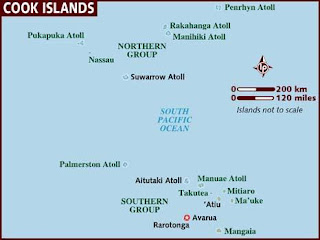 Meanwhile, on the far side of the World, the struggle continues to preserve a unique cluster of languages as a living, aspirating, way of expressing thoughts, emotions and information. Wade Davis, [MultiBlobboPrev] ethnographer and adventurer, has urged the preservation of minority languages because “The world in which you were born is just one model of reality. Other cultures are not failed attempts at being you; they are unique manifestations of the human spirit.” And, face it, the current dominant model for how to run the planet could maybe do with some help, hmmm?
I continue to mine the back-catalog of Lingthusiasm [prev] and found myself stoked by an interview [listen] with Dr Ake Nicholas [transcript], who hails from Ma'uke, the Eastmost dot on the map, but escaped from that small-small place to mainland NZ as a child. Before that shift she had been speaking Ma'uke Māori at home. Afterwards she was enrolled in a English-language school and spoke English on the streets. She was mentored by one of her teachers, a Māori-speaker. Trouble was CI Māori [aka Māori Kūki 'Āirani] and NZ-Māori [aka te reo The Language] were almost mutually unintelligible. But that threat was an opportunity to the young linguist who became consciously fascinated by different ways of communicating. Her parents were active in the kōhanga reo ["language nest" to revitalise the language] movement; which has not been without its murk.
Anyway, there's a nice story in that interview about the efforts made by enthusiasts to stop minority languages getting washed away in the tides of history. One of the key elements in successful preservation is to catch language-punters while they are young because damn-but-it's-hard to learn any language after the onset of puberty. I was never a natural with language but I know I hoovered up, sifted, collated and understood other information between the ages of 8 and 13. I was smarter [knew more] on my 13th birthday than at any time until I got my PhD 15 years later. But the problem is that you only need to re-vitalise a language when/if it's on the brink: when the only people who speak it reg'lar are on their pension. And we know how tetchy and intolerant folks can get as the sciatica, arthritis, deafness and palpitations make life hard to bear.
So the Language Nest movement [it's gone global] tries to create materials and resources that are engaging for The Yoof and give over with Granma and how to make soda-bread and darn a sock in Irish. And it definitely needs to go easy on the differences between the present an aimsir láithreach and the present-continuous an aimsir gnáthláithreach because that's so borrrring. There may be strife, because the adults in the room, no matter how well intentioned, are likely to find yoof-culture alienating or threatening or dopey. There is, for example, a Māori Kūki 'Āirani folk hero called Tampiritoa [say it and listen] who is Dumbledore untimely ripped from the womb of Harry Potter and given a new life in stop-action videos - Kua ruti a Tampiritoa - in the language. Wouldn't be my cup of tea but they use Cuisinaire rods as props, so that is cool. Whatever works!
Last word to Wade: Language is much more than vocabulary and grammatical rules. Every language is an old-growth forest of the mind. And don't forget the trigger fish!
More islands
Posted by BobTheScientist at 07:30