We've been running the Wexford Science Café WSC for nearly 6 years now. The idea was that STEM-folks in the Sunny South East would have the equivalent of a Book Club, a Choir, or a Men's Shed - a place to gather with like-minded adults to chat about about science. For those who have made the effort - it can be all to easy to stay indoors on the 3rd Tuesday of February if it's dark with a whippy wind and the roads are a litter of fallen branches - it has been rewarding. Then again, there are more people who came once only than those who stayed to learn the handshake and the secret sign. We've covered a few bases because the community is diverse in its interests and expertise:  Air-quality and asthma; Allometry; Back-garden astronomy; Bacteria in food; Cider; Compost toilets; Diabetes & Alzheimers; Diets; Erwin Schrodinger; Galena; Generic meds; Gravity waves; Greenland ice melt; Gut Microbiome;  March for Science; Neuroscience of torture; Oroville dam; Pheromones; Radon; Science book-swap; Soil microbiome; Stephen J Gould’s spandrels; Thomas Kuhn’s paradigms; Toxicity from botox to beer; Urination once again; Water quality; Wolbachia and tropical diseases; Zombies; 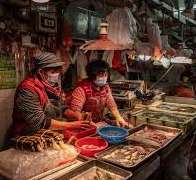 The theme or topic for each night is part of the attraction but the networking and the sense of belonging is at least equal in importance. Last year [2019] we tag-teamed with the Wexford Science Festival WSF which had been launched with some razz-ma-tazz the previous [2018] year. That was a success because their publicity machine was better funded than ours and we swept a handful of new STEM faces into our orbit. Our mutual admiration and common ground made us promise to do the same again in 2020. Then Coronarama swept out of Wuhan [L market-watch] as a pestilence and a great disruptor of all social events; perhaps especially those which habitually met in a pub!

Well, whatevs, we are meeting tonight for a discussion about Coronarama. Far too many people pretend to know everything about: Corona Viruses; SARS-CoV-2 itself; Covid-19; epidemiology; statistics; zoonoses; masks; mink! long-covid; asymptomatic covid; my dead neighbour; PCR testing; R-numbers; vaccines; the Economy; care homes; Sweden and intubation. But when the usual suspects are wheeled out for a sound-byte by the media there is far too much hubris and not enough humility. I am working on a hypothesis that the usual suspects are overwhelmingly male . . . because they are so goddamn certain; which means that whatever news requires a response can be explained and finished with in 200 words or 90 seconds whichever is shorter. Accordingly tonight we are digging with the pink foot and hoping for a more measured discussion about how scientists communicate their findings and how they could do better in explaining things to Jo Public. The gig is hosted by podcaster Dr Megan Hanlon and Cliona O'Farrelly, the Chair of Comparative Immunology at TCD.

Megan's channel is called Unravelling Science, where she is currently on a podcast jag interviewing successful scientists about where they came from, where their inspiration came from, what they do and what can they say to encourage early-stage scientists that it is worth the candle. I like the interview genre very much, it conveys the Passion for Science in a way that any number of dry, passive voice, peer-reviewed formal scientific papers manifestly fail to do. The irony is that the only thing which counts in scientific progress [= promotion] is peer-reviewed papers while the only thing that will recruit the next generation is the passion and engagement of mentors and teachers. Strength along these two unrelated axes rarely meets in one person.

Y'all come along down; you need not leave your sofa but you do have to book one of the 100 seats in the virtual Wexford Science Café. Looking forward!