Technology is wonderful but capitalism makes us unsatisfied.  Is that a suitable definition of the economic system in which we find ourselves? We are induced to buy the next best thing by advertisements which make us feel inadequate or under-resourced. All too often our purchases are used once and then occupy space at the back of a cupboard until we move house and then they get thrown out. Have you ever bought something that turns out to be ill-considered or unfit for purpose?  I stopped myself in time in having another disastrous plunge into consumerism on Sunday last.

Working at The Institute has lots going for it and one positive effect is that I have 12 busy hours a day off-site between leaving home and returning for dinner. The weekend is devoted to catching up on the farm: chopping water and carrying wood and chasing yellow-eyed monsters with a death-wish round the fields. And The Blob fills any nooks and crannies in my days.  That means that I have been unable to contribute to the economy in any significant manner for the last two and a half years. Last Sunday we had to meet people in deepest Waterford and The Beloved suggested that we drop into the Harvey Norman emporium to see if they had anything on sale.  Partly this was because HN had a Mammoth 20% Off Everything Sale which was due to wrap up that evening.
Mr Harvey and Mr Norman met while trying to sell vacuum-cleaners on the same street in Sydney NSW.  They could sell sand to the Arabs but they couldn't sell aNNything to me . . . even at a 20% discount. The beds were bigger than our bedroom, the sofas were all covered in the skins of dead animals and I get vertigo on bar-stools, so the furniture wasn't getting any traction. I don't need a new computer and I go into a terminal apple-andoid-apple-andoid-apple-andoid dither when it comes to smaller electronic kit. The alternatives were to sit on a leather sofa scowling with folded arms near the entrance with all the other pissed-off-waiting-for-herself blokes OR wander into the kitchen appliance department . . . 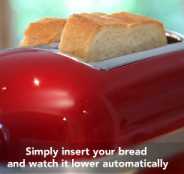 With dropping jaw, I watched a video loop about a toaster. We all love toast: those Maillard reactions are what make food worth eating: we'd all die (of boredom) far earlier if we had to subsist on gruel and boiled spinach. But how difficult can it be? I've made toast on the end of a stick before an open fire, and under a grill and in a regular pop-up toaster which you buy for €25 from Argos. The KitchenAid Artisan 2-slice 5KMT2204BOB was calling to me but I was easily able to blank its importunities despite us both being Bobs. The appliance is full of those needless complications that are sold as features but turn out to be bugs - like electric windows in cars: when they fail you have replace the whole goddam door. Note the text on the still from the video [R]: who needs an engine to start the process off - the main advantage to timed kitchen gadgets (as with milking machines) is to have them switch off when finished.  No amount of bragging "the Artisan Two delivers exceptional culinary results" about any toaster's normal function makes toasting bread an adventure.

And just to show that having an over-specified choice of toasting colour is unreproducible, given the variety of bread, there is a button marked A Little Longer [L] which presumably has pale slices dip below the surface again for another blat of heat. Normal people, in contrast to HardlyNormal people, just push t'bugger down for another go-round and then press cancel. This A Little Longer feature is a solution to an unproblem.  The key word in the advertising is "style" - the 5KMT2204BOB is essentially a €200 fashion accessory. Over-engineered, over-priced and over-there in the house across the valley which is flood-lit at night. And it weighs in at 5kg, so at least you can be confident that your cat is not going to bat it off the counter-top by accident. I know this is a real problem because youtube is filled with clips showing such accidents.

In the tuthree days since I did the research to write this piece, Amazon-ads for this danged toaster have popped up in the wildest places of my restless surfing of the interweb. You'll never take me on this one Amazon - I've made a toasting fork out of two coat-hangers and a bamboo stick.
Posted by BobTheScientist at 06:34