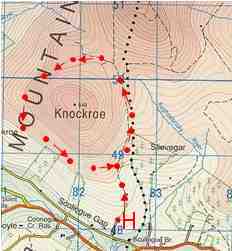 Last Sunday was one of those wonderful 'extra' days: when the weather lifts well after the first frost of Winter. The Beloved was off site, I was awake and alive, it was not raining, so as the dark was fading I set off from home [H right] North up the lane 15 minutes before Sunrise. The advantage to living in the mountains rather than near them, is that you can be a car-ride ahead of the weekend walkers.  I was looking for the last three of our sheep which had been rusticated earlier in the year to eat ling heather Calluna vulgaris and heather purple moor-grass Molinia caerulea. But I was also consciously celebrating the fact that my knees were still working; that my students were not requiring care-and-attention; that a slab of flapjacks was already made. I was feeling lucky, and because we all make our own luck, at about 8am, in the Far East of the territory, I found 3 sheep marked with MN which were therefore owned by our friend and neighbour Martin. That was good news, because it was getting very close to the end of the sheep season, and Martin was pretty much reconciled to the fact that the last handful of his sheep were MIA. I banked them and carried on up the path between hill and forest. As the upland plateau opened out, I was struck by how it had been emptied of large vertebrates since I was up just a few weeks earlier. Occasionally I'd perk up when I saw a white blob on the hillside, but it always turned out to be an outcrop of quartz or the sun glinting off a bogland pool. Along the way I upstarted a couple of golden plover Pluvialis apricaria, so I guess they're planning to spend the Winter. Soon enough I found that I had almost completed the full 4.5km circuit of our mountain without the whiff of any sheep, let alone any with a fist-sized blue dot on the back of their heads. Accordingly, I conveyed his good news to Martin by telephone and sat on a rock to eat an apple and watch the human world waking up below me. The sun was well up, everything was sparkling in a brisk Easterly wind and I was as happy as Bo-Peep.

Three things happened on Thursday:
a) one of our neighbours died: Mike was a craftsman in steel who had made several sheep-handling tools for us most recently in October
b) The Beloved came back from her 3-day shift minding her redoubtable father Pat the Salt
c) on her way home, another Mike, from the Wexford side of the mountain, called her to say he had 2 of her sheep in a trailer and was on his way to repatriate them.
That last was pretty toasty news because it brought the total of recovered moutons up to 7/8.

Last night, Friday, we went into town to show face at Mike the Black's wake. He looked very Mike in his coffin and still had all his hair because he'd refused futile treatment for his cancer, which must have a required a certain determination in the face of interventionist medicine. It was light when we went out but full dark as we approached the lane to come home an hour later. Headlights coming out onto the county road materialised as Martin's tractor and trailer: he had just delivered the 8th and last of our 2018 flock of mountainy sheep. >!huzzah!< Lucky we'd bought a bottle of Jameson in town; imagine having nothing to toast the return of the last heather-prodigal sheep. We'll get them all scanned in February to see if they've acquired lambs in their Summer romps.
Posted by BobTheScientist at 07:41