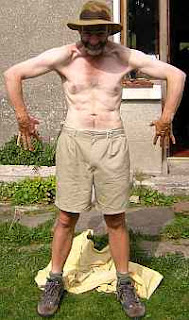 Way hey hey, we have an obesity epidemic on our tums. Something - anything - needs to be done to get people out in the fresh air doing some cardiac exercise. If it doesn't raise your heart-rate it doesn't count;  Grand Theft Auto heart-rate increases don't count either because the tin of beer and the bowl of natchos is to hand - when you're not throwing whores out the door while cornering. And I'm sorry but any exercise that involves a subscription to a gym - that doesn't count either. Unless you're a professional athlete working on the abs or the quads, if you're in the gym you are The Profit for a serial entrepreneur who is making money from a created need. If otoh you walk from France to Santiago and shed 15kg of midriff [that's 30! packs of butter] you get to look like The Prophet [R with string holding up shorts]. Here's a thought - if you want a work out, why not rock up to a pensioner's door and offer to mow the lawn, hoover the living room [under the sofa too ye scabby baastid] or clean out the kitchen cupboards. I did the last chore for my nearly blind, nearly centenarian mother a couple of year ago and it was like a BA in Archaeology - so you might catch some free education as you do good.

A couple of weeks ago the 2Dau of our neighbours was giving a talk at the National Environmental Science Meeting. The event was busy with several parallel sessions but I went along to hear her speak. I was surprised to see both parents waiting for the previous talk to finish so that they could slip in and listen to what the daughter had been up to the last four years. A lot of beetles is the answer to that question. As JBS Haldane [prev] remarked [often] God has an inordinate fondness for beetles. While waiting for kick-off, The Da, Mick, leaned across and asked "What are you doing on Sunday the 28th April?" 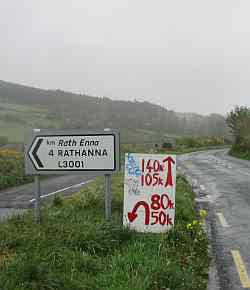 And that's how I volunteered to act the maggot marshall on the Blackstairs Cycling Challenge last Sunday morning in the drizzle. Funky soundtrack to the 2016 vidroneo of the event. You may deduce from the sign [L showing the mizzly pizzly weather] that they gave me a billet of some responsibility where the shorter circuits cut back towards Ballinkillen and home while the 'ard chaws and the well 'ard chaws went onwards and up- and down-wards for a full circuit of Mt Leinster. Remarkably for such a physical event the average age seemed to be about 50 with only one chap who loooked young enough to be in college. But it is ever thus - middle aged to elderly folk seem to be the demographic for participatory events that aren't regular team-sports - samba schools; singing workshops; djembe drum circles in my experience are quite thin on The Yoof. I was asked to marshal the turn from 1020-1230 and, being me, I got there way too early to scope the lay-out and set up my stall. As you see [L] with a minimalist briefing by txt, I decided to make my own sign to make things as clear as could be for the cyclists. I was glad I thought to wear two pairs of socks as it was chillin' just chillin' awaiting for The Effectives to pass by; the first footers didn't appear before 1055! Before any of them passed a van pulled up and handed me a hank of tin-foil - "A snack for ye" <pause> "and some sweet things" handing out another roughly parcelled gift before speeding off to the next station of the cross-roads.

The snack: 3 buttered scones; 3 small cupcakes; four slices of lemon cake; two generous slices of tea-brack. The sweet things got back to my kitchen table untouched [R]: they'll last me about 6 months. BOOST+ protein bars is a lot of nonsense though: it's got no place in a single day aerobic event because a) what you need to get through the day is calories rather than the wherewithal to replace or build muscle mass b) there's less than 3g of protein (out of 49g total weight) inside the wrapper. The Ingredients in Cadbury [shameful shift of their factory from Keynesham to Skarbimierz, Poland covered here] blue: MILK, sugar, palm oil, glucose syrup, dextrose, skimmed MILK powder, cocoa butter, cocoa mass, whey powder (from MILK), WHEAT flour (with added calcium, iron, niacin and thiamin), fat-reduced cocoa powder, humectant (glycerol), emulsifiers (E442, E471), flavourings, thickener (dried cellulose), salt, BARLEY malt syrup, raising agents (sodium hydrogen carbonate, tartaric acid) I say it would be more honest to call it a MILK+cocoa bar

Nobody seemed to know how many cyclists were going to turn up - on-the-day registration was allowed - but I'd guess a couple of hundred. The 12km family event is free [to get the toddlers hooked, I guess] but the 50km - 140km are €30/saddle, and the accounts claim that they raise about €15,000 / yr for local and national charities but some of that comes from sponsorship; the food and logistics is supplied by volunteers. There cannot have been €30 x 500 = €15,000 people but there might have been half that number.

And the point is? That 50 people got out of bed in the morning to make is possible for 250 people to get out in the weather and burn off their week's snacks and feel that they'd earned a Sunday dinner. By no means was everybody bean-pole thin with calves like ship's hawsers but everyone seemed to be having a good time - either in packs or pairs or singletons and many of them said "Thank you" as they whished by. One of the nicest things to note was that I could hear each group chattering away before they hove into sight round the bend; that doesn't happen with car rallies - too fast, too noisy . . . and the only people getting exercise are the roustabouts and riggers in a distant oil field.
Posted by BobTheScientist at 08:20