T for Texas T for Transessee

The other evening, my son the engineer was asking his father the geneticist about Caster Semenya's chromosomes. I hadn't been following the story, and I gave him some incorrect information [she probably has XY chromosomes . . . but I'll have a go at this later] and we moved on to talk about people being born in the wrong body. I boasted that The Institute now had >!ta RAAA!< gender-neutral bathrooms . . . because it had put different signage [as L] on the wheel-chair access bathrooms. The Boy gave us a very slow hand-clap for making people who cannot walk wait in line while a variety of other people use a bathroom they feel comfortabe using. It's a bit like using  ♿ disabled parking spot ♿  because you're really crap at reversing your car and you need a wider approach. As such, the ⚧ spiked wheel is an unintentionally appropriate symbol. I met the president of The Institute at the Open Day on Saturday and mentioned this labelling solution to the bathroom problem. 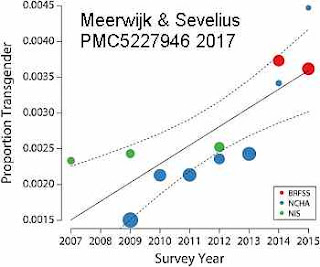 Not for the first time, I asked myself whether gender dysphoria [no longer called gender identity disorder GID in these inclusive times - because it's not a disorder] is a national problem or just a headache with which individuals have to deal. For quanti-me national vs individual hinges on frequency [R f =~ 0.004]. They say that some men wish they had a 12 inch pianist and many people would be delighted if the tax-payer would stump up €1 million to pay off the mortgage but it ain't gonna happen. Contrariwise, if it turns out that none of our black students can secure a 12 week work-placement while all the Old Irish can, then we might do something about it. Because that seems less about the student and more about the injustice of prejudice. The graph [R] from a 2017 study by Meerwijk and Sevelius gives some sort of an answer about the frequency of Transgender people: 0.4% or 1/250 people on the planet don't feel right about the gender they were assigned at birth. That's a lot: 1 million US citizens or about 20,000 in Ireland. Perspective: that's about 4x as many as the 5,000 capital D deaf people; but less than the 50,000 registered blind. For parity of esteem, I should add that 100,000 people report having impaired hearing - these are mostly people my age [wha'? wha? speak up young man] and older and we really don't have the same burden as those who never heard. My macular degeneration Mum is registered blind, with a disabled parking ticket for whoever is giving her a shopping lift, but she can with effort read the newspaper. So none of these conditions {gender | deaf | blind | leg-disabled} are monochrome but all on a sliding grey scale.

There's another term - gender non-conformity - which seems to be more of a life-style choice - maybe like  Eddie Izzard's taste in eye-liner and sequins? then again Izzard is a well 'ard multi-marathonner who'll take the fight to anyone who disses him, so in that sense he's still part of the Patriarchy. Then again, then again: we want to be careful about treating mental troubles as less serious than physical troubles: depression kills 10x more people in Ireland than infectious diseases and 2x more than vehicular homicide.

Gender dysphoria is less of a laughing matter than Eddie Izzard (who is funny) which really adversely affects the quality of life.
4x more likely to live in poverty;
2x more likely unemployed
2x more likely homeless
4x more likely HIV positive
40% attempted suicide ['normal' range 1-2% whc is worrying enough]
Anyway, on the basis of these [admittedly arm-wavy] figures, we might find it in our hearts to help people as they Transition from the gender they grew up with. At the very least by getting the freaking pronouns correct; keeping bathrooms inclusive; not caring whether someone is bloke or belle - especially if you don't fancy them. When we've got that far along the road to common decency, we could think about paying for the hormones and the gender reassignment surgery. That answer betrays me as currently thinking that gender dysphoria is a personal thing not a public burden. But Patriarch SWM me would say that, wouldn't I? Then again I'm with the NCPE in denying €300K/yr Orkambi drugs to youngsters with CF. 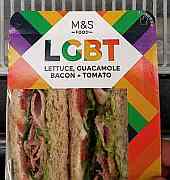 There's an interesting and informative piece-to-camera in Nature by Sara Reardon their Wash DC correspondent. In Science in Transition she investigates the health impacts on people as they make the burdensome changes necessary to become happy in their own skins. And if you haven't heard about TERF wars, then you haven't been listening. And lest you think that there are limits to what capitalism will do to exploit a marketing opportunity, I suggest you try the new BLT [R for right-on] from Marks & Sparks - anything to abstract money from the smashed-avocado-for-breakfast generation.

Not directly related but today is GAAD Global Accessibility Awareness Day designated as such by Joe Devon & Jennison Asuncion Who dat? Check out the Global for an event near you? Here's some advice about Powerpoint from the UCD event run by my old pal Grace Mulcahy. San Serif font: big; clear contrast; use Alt.Text for vis-impaired.
Posted by BobTheScientist at 07:32