It must be about 25 years ago that I found, in the local library, a planning report for the Swords bypass: a new roadway to expedite traffic between Dublin and Belfast. It was rivetting. Lots of full colour maps showing different land-owner's holdings down to fragments of fields; each annotated with whether they were subject to compulsory purchase. In some cases fields were purchased because they had been exclaved from the farm by the new road and were too small to sell to anyone else. The report included several pages of agonising about a particular badger Meles meles [prev] sett which was to be rolled to oblivion by drainage stone and concrete.

And any new road network's brutal assault across the landscape is not the end of the damage to the local ecology. All those cars tooling up and down to Limerick and Galway have been spitting lead and particulates from their exhaust pipes, wearing out the brake shoes and just leaving additive-laden tyre-rubber on the road surface. As the century turned, some water quality watchdogs said we should worry about this as a source of water pollution. The EPA took up the baton and commissioned Impact Assessment of Highway Drainage on Surface Water Quality 2000-MS-13-M2 Main Report by Bruen, Johnston, Quinn, Desta, Higgins, Bradley & Burns (2006). It is 270 pages of gradients, sumps, gullies, pipe-diameters, kerb heights, polycyclic aromatic hydrocarbons (PAH), French drains, Intensity-Duration-Frequency (IDF) curves, grit-traps and cadmium. Did you know that, in addition to salt NaCl, road salt may contain iron, nickel, lead, zinc, chromium and cyanide? Attempts at remediation of surface run-off can, if poorly designed, hold back contaminants until there is a catastrophic over-flow of toxic crap. Effective drainage can concentrate herbicide, sprayed to control marginal vegetation, and deliver it to a local water-course overwhelming its power of dilution. Those are some of the unintended consequences of piling on a fix for a problem created by people so that they can drive their carbon footprint up the planet's wazoo. 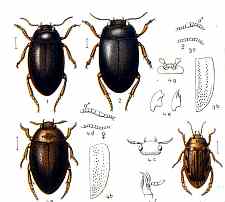 I heard about a rather more feel-good unintended consequence of Motorway infrastructure at the EnvSciCnf two weeks ago. A young scientist, Róisín Normanly from UCD and raised not 10km from Castle Bob, presented her final year research project at that annual National Jamboree for environmental research. It's quite rare to have an undergraduate give a talk at the national forum, and it's competitive: the science must look good to make the cut. What she has done is carry out an audit of the wildlife that can be found in the holding ponds which you see periodically as you zip past on your way to somewhere else. The holding ponds are part of the solution for protecting local watercourses from [toxic] road run-off. Not sooo toxic it seems because Normanly caught 16,000 water beetles and identified them to 62 different species; mostly predatory divers Dytiscidae and crawlers Haliplidae. That's 25% of the total number found in Ireland; 10 of which are red listed. By comparison a series of farm ponds were similarly surveyed.  The farm ponds tallied 14 more beetle species but not so many rarities. That's a nice project with a shedload of data, diligently collected, carefully analysed and presented with aplomb. You might think that she was lucky to land such a project - but as attested by my mother and partner and daughters you make you're own luck. Shaking luck up with hard & focussed work, there's a future for Ireland as a scientific nation FITNa!

This is really important because the relentless economies of modern farming [see yest] have reduced the number of farm ponds in recent years, so available fresh-water aquatic habitat is less than it was 100 years ago. The Road Transport Authority RTA by implementing the EU Water Framework Directive WFD has, as an entirely unexpected bonus, given robust support to ecological diversity. A necklace beaded with open water jewels fenced off from casual human access now extends across the country. The structure and size of these motorway ponds seems quite random. There's an eco-engineering PhD in seeing whether pond design could be optimised to get some of those 10 species off the red list and back to pulling their weight as endless forms most beautiful.

Hats off!
Other women in science.
Posted by BobTheScientist at 07:51