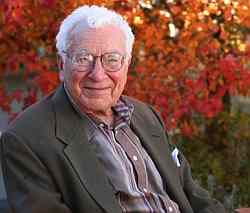 I was scanning the main page of Wikipedia, as I do most mornings because the On This Day section might trigger a Blob; and uttered an involuntary No! when I read that Murray Gell-Mann [R in the autumn of his days] was dead. Not because I disbelieved the information but because I was unconsciously acknowledging a loss - to science; to intellectual discourse; to the pantheon of polymaths. He had a good (89½) innings: being born in September 1929 and didn't stop when he reached retirement age. He wrote a 1994 popular science book The Quark and the Jaguar: Adventures in the Simple and the Complex which I found more complex than simple. That was because, like us all, Gell-Mann suffered from the curse of knowledge - which holds that, having mastered some understanding of the world, it is impossible to imagine what it was like before you acquired that knowledge.  The CoK is a widespread problem in teaching at The Institute (and elsewhere natch). Several times a year, I stop my younger colleagues from complaining about the failings of students to grasp such obvious to all thinking people concepts as pH or molarity or Newton's Third Law [that wrecks my head]. The CoK was worse for Gell-Mann because he knew so much (and he made sure that everyone knew his erudition).

He could use the word Quark in the title of his book because he invented both the term and the concept for making sense of sub-atomic particles. He pronounced his coinage kwork and then came across a phrase in James Joyce's Finnegan's Wake Three quarks for Muster Mark, which implies kwark. But, to his own satisfaction, he was able to make a huge tangle of subsidiary sources to reconcile his original idea with a 'casual' reference to Joyce. That's what polymaths do: they read Joyce for instruction and pleasure and win the (1969) Nobel Prize for Physics "for his contributions and discoveries concerning the classification of elementary particles and their interactions". He called that classification the Eightfold Way in another 'casual' reference to Buddhist practice. That's my sorta guy - I too ripped off the Buddhists in the title for my analysis of the process of pilgrimage. He worked for several years with, and in the same building as, Richard Feynman, it quickly became apparent that no single institution could be big enough for their egos.

His interest in language started him into a project to link all the extant languages of the World back to a single common ancestor. Like Proto-Indo-European PIE, but much much deeper. It is an intellectual problem fraught with problems because you can, with trouble, read something in PIE because English and Irish and Russian all share some common roots. But the few connexions between English and Maori, which consumes much of my cousin Trevor's time, could be because of linguistic universals OR could be borrowings or coincidence. Gell-Mann felt his crap-detector was bright enough to sort the signal from the noise. Two minute TEDxplanation.

Another idea attributed to him, by Michael "Jurassic Park" Crichton, is Gell-Mann Amnesia. Here you read a newspaper article about your field of expertise and find all sorts of errors of attribution and understanding [wet pavements cause rain etc.] . . . and then expect the same journal's reportage on European Law, Ebola Virus or Eritrea to be factually accurate and sensibly analysed.  This is sort of the opposite of my Fodor's Guide to truth and credibility. - which doesn't have an entry in Wikipedia.

Wearing your cleverness on your sleeve can be quite overwhelming and eventually tedious, but for me, the virtue of Gell-Mann's erudition and creativity outweighs the egotism. He has a large media presence because he liked talking: check'im out? on Fermi - on Einstein . . .