Europe - out in the cold 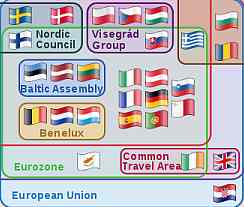 Today 9th May is Europe Day! Let all good Europeans show a leg, lift a glass, hug their Euroneighbour and eat cake. It marks the 69th anniversary of the Schuman Declaration which is sort of the birth of the EU. That's when Robert Schuman, the French foreign minister, announced that French and German steel of coal production would be co-operatively managed - to keep the price up. Ad maiorem deorum pecuniae gloriam [to the greater glory of the gods of money]. As well as the birth of the EU it could also be seen as the start of carbon catastrophe that is keeping me awake at  nights. I think we all know who is in the EU - still 28 members [R - count 'em] with the UK gallumphing about with two feet in the EU but the other two back in a Rule Britannia 1913.  The core of the EU includes those who embraced the €urozone project which has made travel so much easier. Round the periphery are the awkward squad who will not or cannot yet mint €uros: clockwise from the top left: Sweden, Denmark, Poland, Czecho, Hungary, Bulgaria, Romania, UK, Croatia. The only member of the Visegrád group of Central European countries is Slovakia.

Europe Day 9th May is not to be confused with Europe Day 5th May which celebrates the formation of the Council of Europe 70 years ago on 5th May 1949. Council of Europe [not to be confused with the Council of the European Union] is bigger than the EU and includes a miscellaneous group of peripheral states extending as far as Vladivostok. It needs a clickable Venn Diagram to make sense of, especially for those who are vexillologically impaired - all those 90° turn flag-pairs - Poland v Malta v Monaco; Netherlands v France; Hungary v Italy.

The Council of Europe includes Microstates that use the €uro - down the bottom: Monaco, Andorra, San Marino, but not the The [€uro] Vatican which is regarded as a theocracy and so excluded; Kosovo and Belarus and Kazakhstan [10% of which is West of the Urals] are the other exluded states. These out in the cold Euro states are lined up on the right of the diagram. 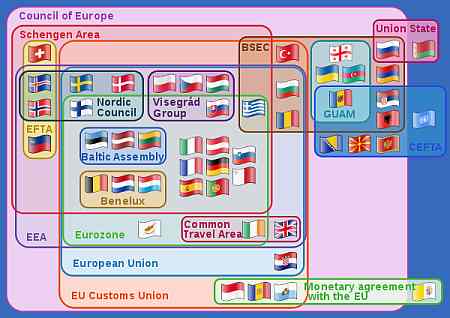 I was brought up all standing by the presence of "Guam" in the midst of these European entities: isn't that US protectorate on the other side of the world? with a palm tree on its flag? But it was my bad reading for GUAM / ГУАМ an acronym for four post-soviet states: Georgia, Ukraine, Azerbaijan, and Moldova. So there you have it: lots of cliques whispering to each other in the corners and sending reps to live the high life, serving the interests of their countries abroad. You may hum the European Anthem - nobody knows the words.
Posted by BobTheScientist at 09:39