Science is A way of knowing [prev]. I'm a scientist, I've had a lifetime in science trying to make sense of it all. If I know One thing now, it is that no person, not even the most tediously obsessive know-it-all can can know it all. What scientists do is find a spot at The Frontier, preferably not too busy with other scientists, and start chipping away making sense of it. With time, and money [thank you governments and founadations] and an occasional creative spark, we can fuse the chippings to make another brick in the wall of understanding. That provides an extension and a foundation for others to add their own synthetic brick. The universe trundles on with or without the wall; with or without the synthesis; with or without you. The scientific process is only useful if the discoveries can be explained to others. The standard scientific brick is a peer-reviewed publication; written in a formal, idiosyncratic style; read by other scientists who use the information to push at their own bit of the Frontier. Readers of The Blob, including myself, know that the 'explanation' is often dense = opaque, and therefore stupid.

Saturday night, me and The Beloved, and Pat the Salt her aged father, were in The Arts Block to see what they could do towards making sense of it all. We spent a couple of hours, including a most welcome tea and cakes, at Liminal States in St Patrick's Gateway Centre a re-purposed Protestant church in Waterford. Liminal States has been a massive multi-media multi-cultural project headed up by visual and performance artist Alanna O'Kelly. It was funded by Wexford CoCo and Waterford CoCo through their Arts Office[r]s and the Bealtaine Festival of Age and Opportunity.  Liminal States are at the edge - ultimately from the Latin limes = frontier. Frontier?? that's where we-the-scientists are! But of course it's a different frontier with different Ways of Seeing. There's a use of language in any field that makes more sense to those in the tent looking out, than the folks outside the tent looking in. Look at me: Blobbin' away about science and culture; thinking it's both clear and useful but often desperately in need of a ruthless copy editor.

What we heard in St Patrick's was a hub-bub of exotic sound: somewhere high up, a recorded sound-track but on the ground a buzz of comms in a dozen different languages. What we saw was the floor being gradually covered with mandalas of overlapping stencilled patterns picked out in primary poster paints. I can imagine that the building custodian was thinking Jakers, I hope they clean up after themselves. I was thinking this paint is going to be tracked through a lot of homes in Waterford tonight.  But that's not the point. The event was the culmination of a Process, involving women at a Direct Provision Centre down the way from Waterford City.  I've written about Direct Provision before - DP centres are hostels for displaced persons people awaiting a decision on the application for asylum in Ireland. They wait and wait and wait in a limbo of enervating boredom occasionally jangled by another court appearance or a meeting with the lawyer. DP Centres are often former hotels built hopefully in peculiar places . . . if they had a functional business plan, they'd still be hotels. It's a Limbo - a Liminal State - a dump of unPersons unrecognised by the State; cut off from their physical neighbours by cultural, economic and psychological barriers. A frontier with too much law and not enough compassion. 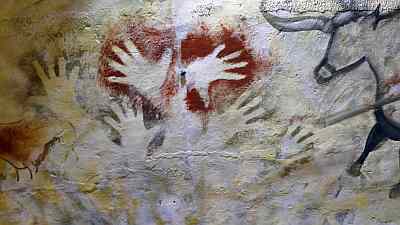 What Alanna O'Kelly and her sunny arty crew have done is rock up to the DP centre with a boxful of paints and encourage the women there to express their true selves in paint or performance or story. More importantly those stories have been heard. Received with respect and attention and whatever time it took to express their understanding of what it means to be human and alive. Wade says it for Tibet - Liminal States says it for Sierra Leone, Somalia, Guatemala, Kurdistan. All those colourful, exotic, tasty, ways of being. Not better than bacon-and-cabbage but different, definitely different.
Posted by BobTheScientist at 07:43