On Wednesday I was in Trinity College Dublin for a couple of events and found out on arrival that a) it was Trinity Week - their annual celebration of Summer, scholarship and sport b) that the theme of this year's jamboree was Silence c) That they were showing Philip Gröning's Die Große Stille - all 3 hours of it. The film was an unexpected hit when it was released in 2005. Unexpected, because that was when the Celtic Tiger was roaring itself hoarse in a tizzy of consumption and debt while Die Große Stille is about a bunch of men who have given up all that nonsense and are living a life of prayer community and contemplation as Carthusian monks.

Well I was a busy fellow that day:

But I popped in to catch 90 minutes from the middle of Die Große Stille. I'm pretty certain that I didn't miss much because this is a film with no plot and no sound track and certainly no car-chases. Carthusians are not enthusiastic about car-chases. Of course there is a sound-track but chunks of the film are extended close-ups of monkish faces looking contemplative - some with an enigmatic smile of embarrassment at being so intrusively the centre of attentions. Because the shot goes on, you get to realise that there is sound: birds are tweetling outside the window or the wind is heaving the trees about: the back-ground to our hearing lives which we often discount to unawareness. I rose in the half dark this morning and caught the first cuckoo of this year at 0525hrs. He is silent now as I write and I only heard the call because I was myself in the dead quiet of dawn. 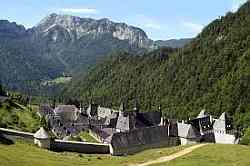 The film is often opaque because Gröning, as well as dumping the idea of a sound-track, also left the key grip, the best boy and all their lighting back home in Germany when he travelled light to spend six months with in Carthusian head office at La Grande Chartreuse [R in the mountains 100km South of Geneva]. He follows the monks as they go about the daily and annual routines. He spends quite a bit of time in the barbers as the old boys get their buzz-cuts. They leave the eyebrows to get extravagantly out of control as old chap's eyebrows will. Apart from the electric hair clippers the interiors are bleakly 19thC with ancient radiators and bare wide-planked wooden floors. But the poor lighting is a metaphor for the lack of explanatory text
I'll have to watch it all again, slowly, to make sense of it. Choice: con subtitulo español or without. I could do that silence.
Posted by BobTheScientist at 08:24