Old ways down the Déise

For about a year 2017-2018, I used to spend Sunday night with my venerable father-in-law Pat the Salt as part of the rota of Elder care down in Tramore. On Monday mornings we'd walk up to the community centre on the promise of free tea and biscuits with The Heritage Group. This group had been convened a few years earlier and was structured to capture the everyday story of Tramore folk who grew up in the 30s 40s & 50s of the last century. The convenor, prompter, key-grip, boom-operator and sound-recordist was Maxine Keoghan FG, BA, PhD, local historian and community activist.  I became a fly on the wall as they collectively walked up a virtual Patrick Street to determine who lived at #35 after the Powers left for England in 1952. My credentials, apart from coat-tailing on Pat's legitimate seat at the table [and the biscuits, of course], were accepted when I claimed the harbourmaster of Dunmore East as my grandfather. Even though for most Tramore folks, Dunmore might as well be in Burkina Faso for all the notice they took of the next village down the coast.

I forget who lived at #35 because those details are of limited interest (to anyone!) but those sessions were fascinating because the details clagged together to evoke a time and place that would be recognisable to anyone who grew up in any small town in Catholic Ireland during those years. The endemic poverty, the damp, the TB, the loss: through relentless emigration and premature death. But also the simple pleasures and outdoor pursuits of those undigital times. People got a lot more fresh air back then - any excuse to get out of a house crammed with siblings and cousins and demanding parents. The personalities forged by fortune and privation and friendship shone through the intervening decades. At the end of my time with the Heritage Folk, I had a good idea who would be the best fun at a hop; who would lend me a bicycle to get there; who could be trusted with a secret and who would have the hottest gossip. All different, all interesting, all vital cogs in the mills of community. 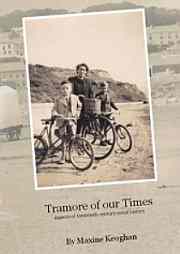 Now after 5 years in gestation, Maxine has written it all down, thrown half the material away under the stern diktats of a good copy-editor, and published Tramore of our Times: aspects of twentieth century social history. I know because I was invited to the Launch in Tramore County Library on Friday evening 10th May 2019. The book is leavened with many pictures of the Tramore in the olde days as well as pictures of the contributors taken by local photographer, tech whizz and heritageer Eddie Drea. In several cases the recent picture of an octagenarian is matched with a thumb-nail of how s/he was when all the teeth in the smile were real and a bicycle could be ridden for 40 kilometers with not a bother to the legs.

While we're here in The Déise, I'll give a shout for a candidate in the local government elections on the 24th of May:  author, local historian and community activist - Dr Maxine Keoghan. Vote early and vote often.


Posted by BobTheScientist at 07:08