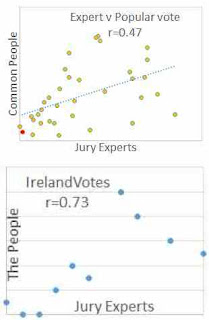 The EireVision Song contest came and went without me tuning in at all and all. It would help with the tuning if we had a television, of course.

IF you're into fishnet hosiery, stilettos and very tall fit young women crawling about on the floor THEN you'll be sorry Ukraine and their song pick by Maruv couldn't sign a licencing agreement, so had to withdraw from the competition in February. If you prefer spikes, leather and fake blood then Iceland's Hatari is yer only man. At least he's singing in his native tongue rather than joining +70% of the entries to sing in English. And of course there was a background kerfuffle about whether TV can recognise North Macedonia as the country that used to be FYRoM - they entered Proud.

That cleared some competition out of the way for Ireland's Own Sarah McTernan . . . but she still came last in the semi-final. I guess that will put a damper on sales. It's Frankly Scarlett for me on that, but I was curious about conformity between the two equally weighted components to the marking process. Would the opinion of a jury composed of media people and celebs agree with a jury composed of people who had 60c to rub together to send the appropriate SMS? Turns out, from the graphs [L] that these two parameters are correlated but not very well, when the votes received are compared [L upper]. As to the votes given, I've filleted out the Irish numbers to show [L below] that there is a bit more cohesion between the Celebrity Influencers and The Plain People of Ireland.
Posted by BobTheScientist at 10:47