Dau.I and D1SO are off to Amerikay this month! They're going to hang out mostly with their pals in Boston; although I'm hoping that my pals will find time to buy them dinner. The lure of NYC is too much for the Yoof and they had planned for a weekend in The Big Apple. Since they booked with Norwegian, shit has happened with Boeing 737max planes, and their outgoing flight (which was on such a 737Max plane) has been consolidated with one flying to JFK, so they're hitting NYC earlier than anticipated. Dang! 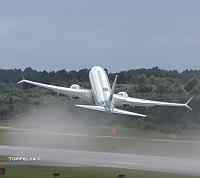 It is a design upgrade and proposed replacement for 737NG Next Generation. It seems that with carbon footprint and the cost of aviation fuel jangling the industry's chain, Boeing installed new fuel efficient engines on the original design. These big boys needed to be installed at a more forward part of the wing and that tended to perk up the nose of the aircraft when climbing - from take-off, [R 737MAX taking off at Farnborough Airshow 2016 - movie has to be seen to believed] .say. If the nose goes up tooo far the wings lose their capacity for aerodynamic lift and the plane falls out of the sky - it's called a stall. Competent pilots can recover from a stall  . . .  if the ground isn't too close. Stalling being seen as the problem, the Boeing engineers had a 'fix' which was to nudge the nose downwards by twitching the tail flaps. This was all to be done automatically with a software fix called the Maneuvering Characteristics Augmentation System (MCAS) which took data from the Angle of Attack AOA sensors on the front of the plane. In Ethiopia, and previously in Indonesia, the AOA seems to have jammed in the up position; MCAS kicked in to lower the nose; the pilots tried to keep the nose up while frantically trying to work out why their plane was going weird on them; the MCAS won and everyone died. I'm getting some info from Juan "Oroville" Browne at Blancolirio [dam-prev], a qualified pilot and following my nose [keep it Up, Bob, you're not going to stall] to fill in the backstory. Boeing engineers have been mandated to lather on another layer of fixes to fix the fixes  - because it is too expensive to go back to the drawing board and design the whole plane better. There were nearly 400 of these 737MAXs disaster-waiting-to-happens out there (until they were [reluctantly] grounded) and 5,000 on firm order.  We'll see if Boeing can recover from the reputational damage / PR disaster. Wendover Prods explains this better than I can - with pictures. And latest on cost-to-Boeing from Blancolirio.

Because flying is magic [Any sufficiently advanced technology is indistinguishable from magic, Arthur C Clarke] to the most of us, we take the words and deeds of designers, engineers (and pilots) on trust. Somehow we feel that, as drivers, we have locus standi to have an opinion on driverless cars - whether they are A Good Thing and how they should deal with Edge Cases.  I've put out my utilitarian stall on trolleyology in several guises before - and I've also mentioned driverless cars before as a sort of inevitable future for us. Radio Canada put out a nice little essay with cute super-primitive cartoon movies about where utilitarian maths might be programmed into driverless cars to have the best possible outcome if things go wrong:
Now then, who is going to write the software to implement all these choices? Programmers, is who. I've been a programmer, I've lived with them, worked with them, gone drinking with them. Many of them, incl. self, are on The Spectrum with blunted affect and so able to add body counts into their algorithms but not really able to empathise with dead bread-winners in a distant future city.
It's a nice conundrum and the story was picked up by Metafilter where lots of people rowed in with their own perspective on the matter. The Metafilter co-operative crowdsource is really rich in viewpoints.
I've shown the Psychopath 2 y.o uh-ho! take on trolleyology before.

Finally and as a salutary antidote, before you next rev off in your metal box to buy some useless old utensils, spend 20 minutes watching this story of 4 carpenters spending a week making 8 x 13m rafters for a medieval church. The last rafters lasted 800 years - I put it to you that there is nothing you can buy at the end of your carbon-tax-free car-journey that will last even 800 weeks.
Posted by BobTheScientist at 07:48