In March I was holding forth about Irish Sign Language ISL because Dau.I the Librarian had been giving me an earful on a visit home. She can do that because her on-the-job training was in Cabra just down the road from the Deaf Village which is a deaf ghetto cluster of institutions and facilities for the deaf. In my piece I noted the historical quirk that has ISL more similar to French SL than to the English equivalent. That's all proper because I now know that SLs are not a transliteration of the local speech but each a separate language with its own grammar and syntax. 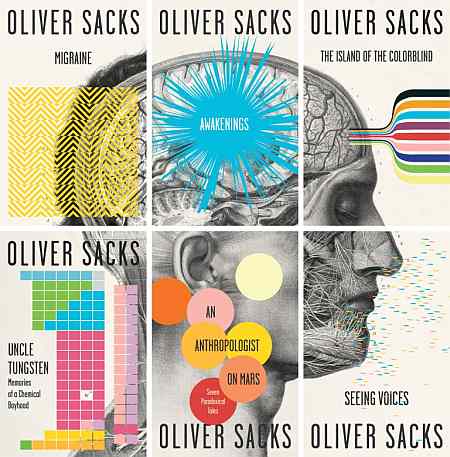 If you want to get an insight into what fresh hell it can be being deaf, you could do worse than read Seeing Voices by Oliver Sacks, whose The Man Who Mistook His Wife For a Hat I have cited previously. Seeing Voices is A journey into the world of deaf culture, and the neurological and social underpinnings of the remarkable visual language of the congenitally deaf. I have a copy of both Uncle Tungsten and Awakenings and they are both excellent and I also like the montage cover designs of the book series [above].

I'm on about the deaf again, because I was up in TCD this week for a couple of events that lurched at me from the Twittersphere and when I arrived I twigged that it was Trinity Week which this year is themed on SILENCE. Actually I think Trinity people do whatever they feel like whenever they can book a room on Campus and if it fits the theme that's a happy accident.  Certainly the evening event I had in my diary was about the inflammatory prequelae of Alzheimer's; which can get rather more shouty than silent. And the lunchtime gig was not part od silence but rather part of the long tail of Schrödinger [prev] events and (therefore?) held in the Schrödinger Theatre where I learned Physics [from ETS "Nobel" Walton] as a student in the 70s.

It was billed as a 'discussion' on the theme of language. But five talks, completely unrelated and unconnected is rather a Gallop than a Discussion and I'm glad it was before lunch rather than after because I may well have zzzzed off if my circulatory system had been the least bit diverted from brain to bowel. It's a convention in The Arts Block that lectures are read from a script, which is good for time-keeping but makes for poor theatre. Science lectures at their worst are read from powerpoint slides, so you only see the back of the speaker's head. At their best otoh Science talks can be high drama with great narrative pacing, mighty gesture and spittle <eeeeuw> into the front rows of the audience. They got a scientist Fred Sheedy to talk - about the language that is DNA - and he had powerpoints but even he read his script. As planned, probably because of the scripting, the event finished on the dot of 2pm [+2 minutes] so that people could go back to their day-jobs. 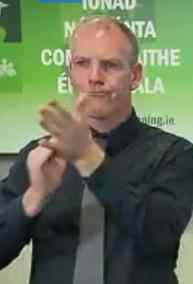 One draw for me was that the whole event was to be ISL signed by a bloke called Michael Feeney [R]. Signers can be a bit distracting, like sub-titles, but here added a good bit of dramatic effect to the talks. The middle talk was by Elizabeth Matthews of the School of Inclusive and Special Education where she is the expert on education for the capital D deaf - those usually born thus who identify as a member of the hearing impaired community. Different from deaf like me who is continually asking students to repeat themselves or Pat the Salt my aged father-in-law who has, but hates, hearing aids; we identify as The Patriarchy rather than by our hearing loss. There are 5,000 ISL users-as-a-first-language 95% of whom are born to hearing parents who have to scrabble to catch up with communications with their newly beloved. The kids come to school with an immense learning deficit because of these communication problems. A normal Chomskyan child with ears effortlessly acquires correct grammatical, locally accented language years before school starts and then uses that tool to accumulate all sorts of other knowledge.

Things are not helped by the fact that there are {no | nil | nada | zero} deaf, primary language ISL, national school teachers in Ireland - none. Because most deaf kids are exempted from Irish through school to cut the poor buggers some slack in their silent world. But Nil Gaeilge is not [politically] acceptable when you apply for teacher training college. So whatever little ISL the teacher has must be like trying to learn algebra through Latin for the deaf kid.  And whoa, it turns out that there is a big deficit in the world of STEM words in ISL; so gene, isobar, algebra, statistics, chromosome, gamma-amino-butyric-acid all have to be spelled out. Mild hilarity as Michael the ISLigner tries to keep up with the list!

The Central Praesidium of ISL have decided on signs for 150 key terms in maths and are now working on a similar list for ecology and environment. That's really cool. It forces the relevant committee to address the hierarchy of Essential for each topic. I had a go at this important gateway in discussing David Botstein's revamp of introductory science at Princeton. When they come to populate the ISL committees for genetics, evolution, biology, I'm yer man! 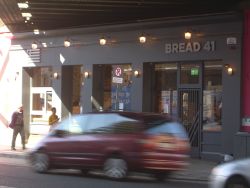 A bunch of us went off to lunch [R & right-on] to try to dry out after the information deluge we'd just experienced and we there heard about what it is like bringing up a child who, although he is able to hear is profoundly aphasic and is unable to express himself or communicate any but the most obvious needs, desires and requirements. Because The Blob is approaching infinity, I was able to contribute the use of the gesture comms method of Sing & Sign with which pre-verbal Gdau.I and Gdau.II were helped through the frustration experienced during The Terrible Twos from being able to articulate what they want. Turns out there is another sign language out there: Lámh is "the manual sign system used by children and adults with intellectual disability and communication needs in Ireland". Because it's a gesture language effectively unrelated to Irish - no fadas! - Lámh can be used by New Irish with as much facility as folks with 4 Irish Grandparents. Like scientific ISL, or Charles Ogden's Basic English, or Globish, Lámh is a reduced instruction set RIS language that is good enough for day-to-day comms but not so hot if you need to discuss Heidigger or learn differential calculus.

Here's a challenge /task.
Look at the list of the Lámh Gs:
Game Garda Garden Gentle Get Girl Give Glass Glasses Glove Go Goat God Good Goodbye Grandfather Grandmother Grass Green Group Grow.
Now edit it so that it has more utility with / for your favorite language-impaired person. Me I'd remove God and add Gay ; and surely Gooooooaaalll rather than Goat; but YMMV.

I'm worn out with just thinking about deaf-comms, I can't imagine what effort it must take to actually do it at the coal face. So here's a little Irish ditty to explain where the post-title comes from.
Sing Lorve lorve ella a hane a doe = A hand, another hand, one, two etc. you can work out the rest