I've had some quiet fun suggesting areas of Ukraine and Belarus that should be twinned with particular Irish equivalent counties.  These are based on a rather compelling similarity in the shapes of these places.  As a European, I'll look for any small chink in the armour of local nationalism that will further the cause of integration.

I was going on yesterday about the strange exclaves of Spain that are dotted along the North African coast.  A similar situation exists to the North of the country.

Llivia (http://goo.gl/maps/QuUBx) is part of the province of Girona but wholly surrounded by the French département of Pyrénées-Orientales.  You can find it 10km East of Andorra, separated from the rest of Spain by about 2km of French fields.  The present population is some 1500 people, so most of us would call it a village.  But it owes its peculiar besieged status to the terms of the Treaty of the Pyrenees (1659) which wound up the French and Spanish contributions to the débâcle of the 30 Years War.  Spain ceded all villages of Roussillon, Conflent, Capcir, Vallespir, and the northern part of Cerdanya to France to tidy up the border.  Llivia wasn't included because it was considered a city.  It's certainly been there an long time, since at least when it was called Julia Libica by the Romans (Libica morphed to Llivia and the Julia got dropped).  Interestingly, the Treaty of the Pyrenees was signed on Isla de los Faisanes, Île des Faisans between Irun and Hendaye at the Basque end of the border between France and Spain.  Pheasant Island is in the middle of the river that separates the two countries there and is administered 6 months on 6 months off by each nation in turn - it's 0.7 ha in size. 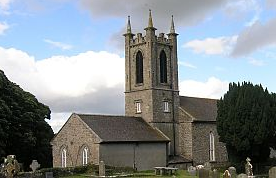 The village of Ferns (also pop 1500ish) Co Wexford is also in some sense a city.  It  gives its name to the Catholic Diocese of Ferns although the bishop has shifted his seat down the road to St Aidan's Cathedral in Enniscorthy.  There was a Church of Ireland Diocese of Ferns as well, but the CoI dioceses were rationalised a while back and Ferns was subsumed into the united Diocese of Cashel and Ossory.  That seemed sensible because otherwise there would have been a 1:1 ratio between bishops and the remaining practicing protestants.  Nevertheless there is still St Edan's Cathedral, Ferns which looks like any other CoI parish church. Aidan/Edan?  Somebody can't spell, but I'm not taking sides on that one.

Ferns was named as a bishopric because it was big and important enough in medieval times to warrant this distinction. All the stars of children's book history hung out there. It was the capital of the Dermott MacMorrough's Kingdom of Leinster, William Marshall built the castle, and Strongbow's daughter was married there.  But nobody claims that it was bigger than, say, Winchester, Ipswich or Nottingham across the water.  In 1337, these all had populations of about 1500 people just like Ferns today and maybe like Ferns back then.

I'm afraid we've missed (ooops I blinked) the Ferns contribution to The Gathering which all happened a month ago at the beginning of June but it's never too late to send a delegation to visit Llivia and exchange Keys to the Cities.
Posted by BobTheScientist at 06:31