I just stopped working in The Institute. It was a lot of fun but not the most prestigious place I ever worked. When I was young, I had a few role models for finding the appropriate level at which to settle. One member [prev; previer] of my PhD thesis committee started doing a PhD at Yale but was far more interested in experimental theatre [it was the 60s!] and dropped out without his degree. That was partly precipitated by dropping out of the fly-tower and grid while tricking about with the lighting rig and making a back-fracturing appearance on stage. About ten years later, shortly before I got to know him, he decided to get back into academia. Being methodical, he opened the  Third Level Education  part of the Boston telephone directory and, starting with Bay State College, cold-call them alphabetically for vacancies teaching science. That net landed a fish in the Ls. He joked that, but for getting the gig at Lesley College, a rich-girls fee-paying teacher-training college, he might have gotten tenure at MIT.

He came to the job with marginal credentials [PhD Yale, failed] but high standards: scientific, ethical and educational. At the end of his first full year teaching he failed a third of the students - the ladies who had been more interested in shoes, cars, bling and parties than studying chemistry, biology and physics.  His academic dean called him in and e x p l a i n e d that the college - and his salary - depended on having students on the books for the full three year course rather than flunked out and taking their fees and dissatisfaction elsewhere. The Man and the man came to an accommodation and he spent 20 years there, doing his inspiring best to get his charges to fulfil their potential . . . and a little bit more.

This anecdote came rushing back to me because of the 2o2o Leaving Certificate by Predicted Grade fiasco which has been unfolding through September. The Department of Education, being unable to find competency within their ranks, out-contracted the PredGrad calculations and handed over some €000s to a Canadian company Educational Testing Services ETS. The fiasco emerged as three substantive errors in the ETS algorithm were identified in a review process after several Leaving Cert "clients" felt hard done by and took their dissatisfaction to the courts. "Fairness" was considered achieved if the Body Collective of applicants both ate their cake and had it: those who had been falsely bumped up a grade or two were allowed to keep their grade AND those who had been bumped down a grade or two got their druthers as well. 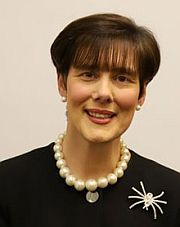 The consequence of this Minister of the Liberal Hand [Norma Foley, seen L] largesse is that Universities and Institutes have to scrabble about to make space in courses that might already be fully subscribed. Which means that many other students are going to get less contact time because the finite cake of contact hours is diced thinner. Almost by definition these back-door students are going to be academically weaker than those who secured their place on the first pass.  So the average student is going to get less individual attention and less bang for their buck.

I know of a particular egregious threshold effect where academic staff are, like the Dean at Lesley College above, far too invested in their students and have allowed the weakest links to bumble through several years of college consistently failing modules, scraping through them on the re-sits, having their marks massaged [like the 2020 Leaving Cert, always upwards] at the Exam Boards. This attachment to your own students happens at the best Universities. Now a very personable, but hopeless at book l'arning, chap has been allowed through to do another year in his chosen course. That means there are now 10 students in his cohort which is +1 above the physical-distance limit for the lab where they will be doing their hands-on experiments. And that means that the cohort has to be broken into two pods, each getting half the practical labs for which they have paid!

Rising all the student marks in this way is a form a Moral Hazard where the decision makers don't pick up the tab for their actions; but rather shunt the responsibility and/or consequences onto someone else's shoulders. But perhaps the most shameful aspect of these trades is that the academic system takes money and time, from people who get very little benefit from their studenting years. Like with dyslexia, it is hard for us academics to appreciate it, but there are a great many fulfilling, meaningful and profitable ways to make a living, none of which involve sitting exams. Our needs [to keep The Institute afloat; to not be seen to fail in our pedagogy; to create clones of our own sad academic selves] too often prevent a subset of our students from realising their true selves and getting on in a more suitable career. Four years apprenticed as a plumber or electrician will set them up to earn more with their hands than the likes of me setting and marking exam questions.

<illuminati alert>Look carefully at the shoulder of Minister Foley. This may remind you of Baroness Hale and Cédric Villani whom I've previously suggested are members of a shadowy web pulling the strings of the world so we dance to their tune like marionettes.