As mammals, we try to make sense of the world using the sensory apparatus with which we have been equipped by evolution. Bats buzz their prey with ultrasound; we are really good at recognising shifts in the patterns which bombard our retinas: that's a  tiger  in the long grass! Actually we're rather too good at this task and will often over-fit the data so it slots into a familiar bin. We are particularly good at recognising and distinguishing faces, so it is impossible to un-see the faciness of the rock formation on Mars [R]. It's the pareidolia [prev] innit? Part of that problem is that the surface of Mars is hella extensive and bumpy and something, somewhere is bound to look like something  . . . and get a Whoa! headline in the Daily Express. UK Woolworth stores, for example, do not snap to an occult grid of ley-lines.

Today we're having a dive down a cross-lines rabbit-hole about the Birth of the Bomb. Nuclear physics was, in the 1930s, a particularly international field where monster intellects would visit each other's labs and share ideas about the nature of the very small. Otto Frisch, born in Austria and nephew of Lise "Element 109" Meitner, was working with Niels Bohr in Copenhagen. While visiting colleagues in Birmingham UK, WWII broke out and he had to continue his researches there. In March 1940, with Rudolf Peierls, another refugee, he worked out that even 1 kg of Uranium235 would be enough to start an explosive chain-reaction.  Bohr continued to write his protégé letters and, as things [political and scientific] hotted up, resorted to telegrams - lots of them, chocka-full of ideas, some sound, some clearly bonkers. 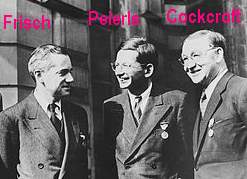 On the day [9th April 1940] the Panzers crossed the border into Denmark, Bohr sent another telegram to Frisch in Birmingham with further suggestions and a cryptic envoi  ". . .Tell Cockcroft and Maud Ray Kent". Frisch and his British colleagues knew who John Cockcroft was [evidence from 1946 photo R] and presumably told him but were baffled by Maud Ray Kent. As they all had brains the size of planets they assumed that, coming from St Niels of Copenhagen, it must mean something. Knowing about Kepler, Galileo and other early cosmographers sending each other too-clever-by-'arf cryptograms to establish priority for the discoveries, Cockcroft decided the phrase was as an anagram for radyum taken. The following day, 10th April 1940, a committee was formed to decided what to do about Uranium in the context of WWII. It was officially named after its Chair George Thomson, and included James Chadwick, John Cockcroft, Mark Oliphant and Philip Moon. But Thomson in an excess of modesty seized on the biggest puzzle of the week and they agreed to call themselves the MAUD committee. Half the fun about being a very clever person with a unique position is being able to name things in such a way that only your inner circle will know the back-story. The MAUD reports provided vital evidence for keeping the Manhattan Project on track.

Later, lesser, bureaucrats applied the pedestrian "Military Applications of Uranium Disintegration" to MAUD as a backronym. Years later it was revealed that Maud Ray was an English governess to the Bohr family who had returned to her native Kent at the start of the war.